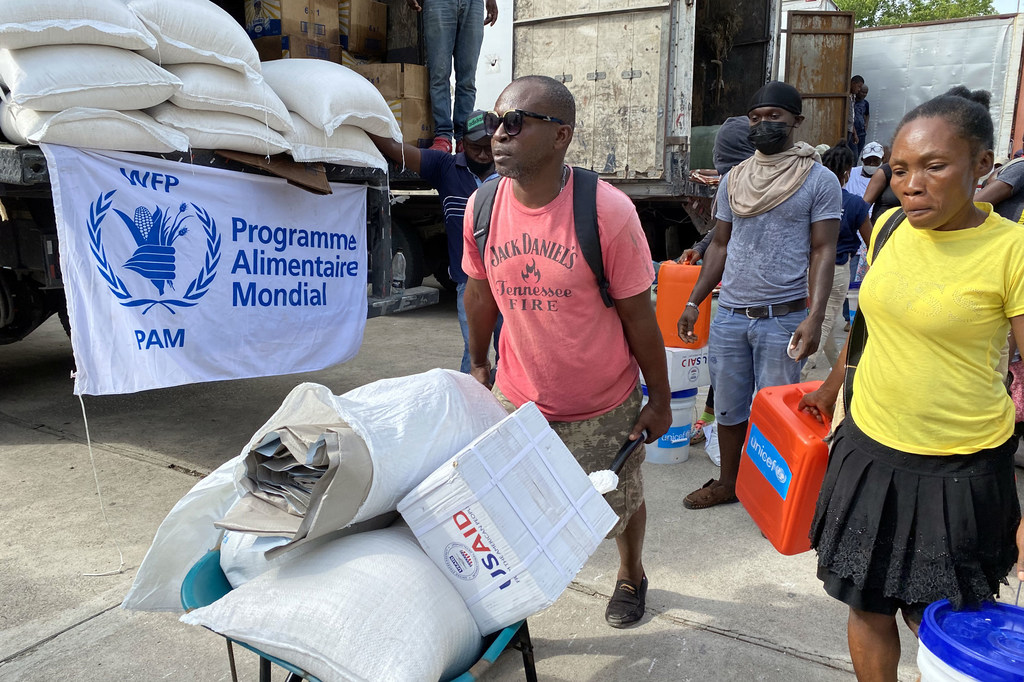 The World Food Programme (WFP) is stepping up ongoing support to Haitians who are now facing destroyed homes, lost livelihoods and little or no access to food in the wake of the 14 August earthquake, the UN agency reported on Thursday.

More than 2,200 people were killed, and over 12,000 injured, in the 7.2-magnitude quake, which struck the southwest of the country and was followed by a tropical storm just two days later. It is estimated that more than 130,000 homes were damaged or destroyed.

The UN and partners this week launched a $187.3 million appeal to provide shelter, water and sanitation, emergency healthcare, food, protection and early recovery assistance to roughly half a million people.

Lola Castro, WFP Regional Director for Latin America and the Caribbean, who was in the city of Les Cayes, described the scene as heartbreaking, with families sleeping on the streets.

“Their houses have been reduced to dust. Public buildings like schools, churches and hotels where they could have found temporary shelter have also been destroyed”, she said.

“The earthquake rattled people who were already struggling to feed their families due to economic and climate shocks, and insecurity. The compound effects of multiple crises are devastating communities in the south faced with some of the highest levels of food insecurity in the country”.

WFP plans to provide food aid to some 215,000 people in Sud, Grand’Anse and Nippes departments, the three worst-affected areas. This represents an increase from the 138,000 people the agency was supporting before the earthquake through food and cash assistance.

Over the past two weeks, WFP has reached 48,000 people and distributed more than 15,000 hot meals, mainly to patients in hospitals, their families and medical staff.

The agency also provided food to 13,000 people in two remote areas in Sud department, where residents told staff they had resorted to picking fruit from trees due to limited access to food.

Speaking on Thursday from the capital, Port-au-Prince, he said survivors listed access to health care, water, sanitation, shelter, education and protection, as the most critical needs.

“Haiti obviously, as you know, has suffered year after year from disasters and deep poverty.  It is 170th on the Human Development Index right now.  This just cripples the civilian population there,” he told journalists attending the daily briefing at UN Headquarters in New York.

© WFP/Alexis MasciarelliThe UN’s World Food Programme is stepping up the delivery of food assistance to people impacted by the earthquake in Haiti.

Bruno Lemarquis, UN Humanitarian Coordinator for Haiti, added that funding is also needed to assist people displaced by a steep rise in gang violence in the capital since June.

Roughly one-third of the population in the greater metropolitan area has been affected, he said. Overall, some 20,000 people are displaced, and 7,000 are living in camps.  The UN is working with the Government to try to relocate them.

Gang violence, along with recurrent political unrest and roadblocks, have made it difficult to access the south. Damage to roads and bridges, and heavy rain, have created additional challenges.

The Haitian Government has negotiated to allow the safe passage of aid convoys during the day, and the UN has also established means to transport trucks by sea.  A helicopter from the UN Humanitarian Air Service (UNHAS), which WFP manages, is flying in medical and humanitarian supplies, as well as frontline workers.

Mr. Lemarquis stressed the importance of applying lessons learned from the devastating 2010 earthquake, which killed some 200,000 people, including 102 UN staff.

He commended national leadership in coordinating relief efforts, and highlighted both the need for aid partners to rely on local expertise and knowledge, and to purchase products from local vendors to support economic recovery.

Haiti is currently in the midst of the Atlantic hurricane season. As one of the most disaster-prone countries in the world, Mr. Lemarquis stated “structural obstacles” must be addressed before the next crisis occurs. He pointed to measures such as enforcing building codes, as well as zoning and planning, which help countries to absorb shocks.

“Haiti, in this regard, has not done a very good job, nor (have) its international partners. Too much is going in Haiti to response, and too little to avoid disasters,” he said.

Mr. Lemarquis urged Haiti’s leaders and people, as well as aid partners, to prioritize disaster risk reduction and climate change adaptation “so that next time there is a natural hazard…instead of the massive loss of life, massive impact on the GDP (Gross Domestic Product), massive impact on human development, Haiti, like some of its neighbours, can sustain those natural hazards.”