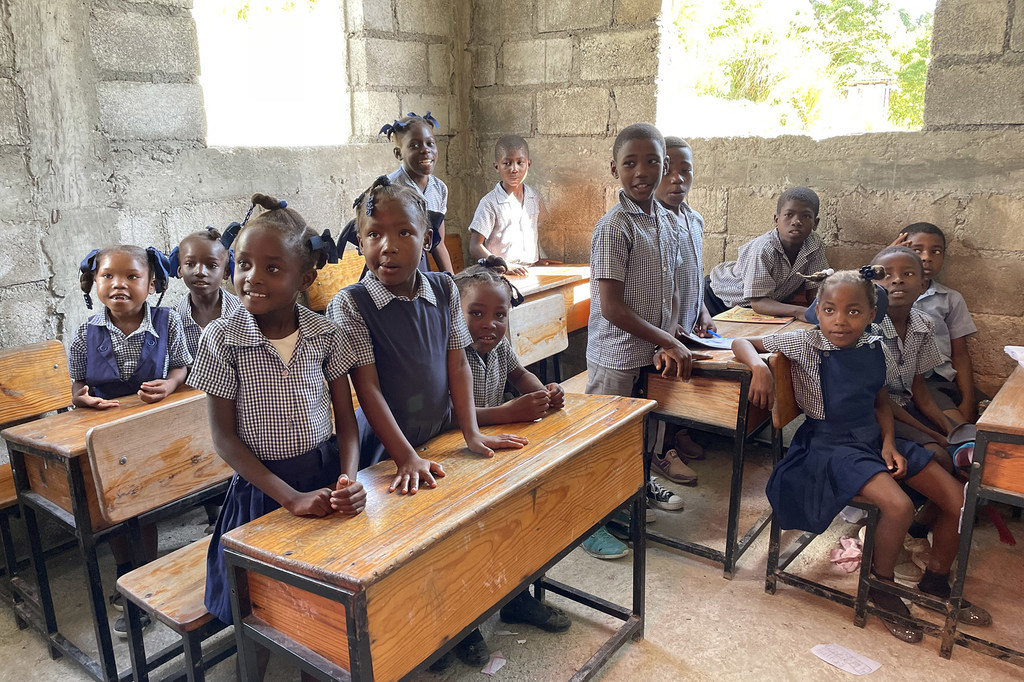 Six months after a devastating earthquake in south-west Haiti which caused the deaths of 2,200 people and injured 12,700 more, the international community is coming together with the Government of Haiti to raise up to $2 billion for the long-term recovery and reconstruction of the country. UN News explains why support is needed

WFP/Alexis MasciarelliThe UN estimates that around 800,000 people were affected by the earthquake.

The 7.2 magnitude earthquake on 14 August 2021, struck the south-west of this Caribbean island nation causing widespread destruction in predominately rural areas. In addition to the deaths and injuries, thousands of homes were damaged or destroyed and key infrastructure including schools, hospitals, roads and bridges were wrecked, disrupting key services, transport, farming and commerce. The UN says around 800,000 people were impacted in some way or another; that includes 300,000 children whose schooling was disrupted.

What was the response to the Earthquake?

In the immediate aftermath of the earthquake, the Government with the support of the United Nations and others swung into action to provide emergency humanitarian aid to the affected people.  The UN humanitarian affairs office, OCHA, played a central role in coordinating the response. The International Organization for Migration provided temporary shelters for people who lost their homes, food and other items so people could get by. The provision of hot meals for school children by the World Food Programme was stepped up in order to encourage those children whose schools were not destroyed to carry on attending classes. Some 60 health facilities were also destroyed, so emergency wards were supported by the UN Population Fund UNFPA and UNICEF. Expectant mothers were cared for and often gave birth in tents.

Six months after the earthquake, Haiti has moved beyond the immediate emergency and is now looking at long-term recovery and reconstruction. In November, the Government published an assessment of the amount of money it needs to rebuild and recover; it amounts to close to $2 billion. Just over three-quarters of that, so around $1.5bn will go towards reinvigorating social services including housing, health, education and food security programmes. The rest will be spent on boosting agriculture, commerce and industry as well as repairing key infrastructure. Spending on environmental programmes has also been targeted.

What lessons have been learned from natural disasters?

Haiti is, of course, not unused to natural disasters and lessons have been learned from the devasting earthquake of 12 January 2010 in which an estimated 220,000 people died, largely in the capital, Port-au-Prince, and surrounding areas. The key takeaway from that catastrophic event and the response effort that followed was that national leadership is crucial.

In 2010, the government was directly impacted by the disaster and was ill equipped and unprepared to coordinate the emergency response on such a huge scale, and as a result, it was side-lined by the international community.

Haiti also has to do better in terms of introducing more robust disaster risk reduction measures.

IOM/Monica ChiriacThousands of people have been displaced after tens of thousands of homes collapsed or were damaged.

What other crises is Haiti facing?

The 2021 earthquake struck as Haiti was facing multiple crises of an economic, political, security, humanitarian and developmental nature. The country has high levels of poverty and ranks 170 out of 189 countries worldwide on the UN Development Programme’s Human Development Report 2020. The economy is in dire straits, not helped by a recent blockade of petrol deliveries by armed gangs which almost brought the country to a standstill. Insecurity, including kidnapping, is rife, with gangs controlling many neighbourhoods in the capital, Port-au-Prince. In July 2021, the President was assassinated whilst at home and an investigation into his death is continuing.

On top of all this, Haiti is facing the ongoing threat of COVID-19.

How can Haiti recover from this latest setback?

On 16 February, the Government is hosting an international conference in Port-au-Prince at which it hopes to raise at least $1.6bn of the $2bn it needs to put the country back on track after the earthquake.

Many donor countries globally are struggling with the extra financial burden the pandemic has put on their resources. Moreover, Haiti is, in reality, competing for funds with other crises around the world, such as Afghanistan and the Ethiopian region, Tigray. One of Haiti’s trump cards may be its huge diaspora, especially in the United States, which it’s hoped will contribute to the fundraising effort. US-based philanthropies are also being targeted.

The international community in Haiti is warning that if the country doesn’t get the support it needs then its recovery, development and ability to withstand other natural disasters will all be negatively affected.