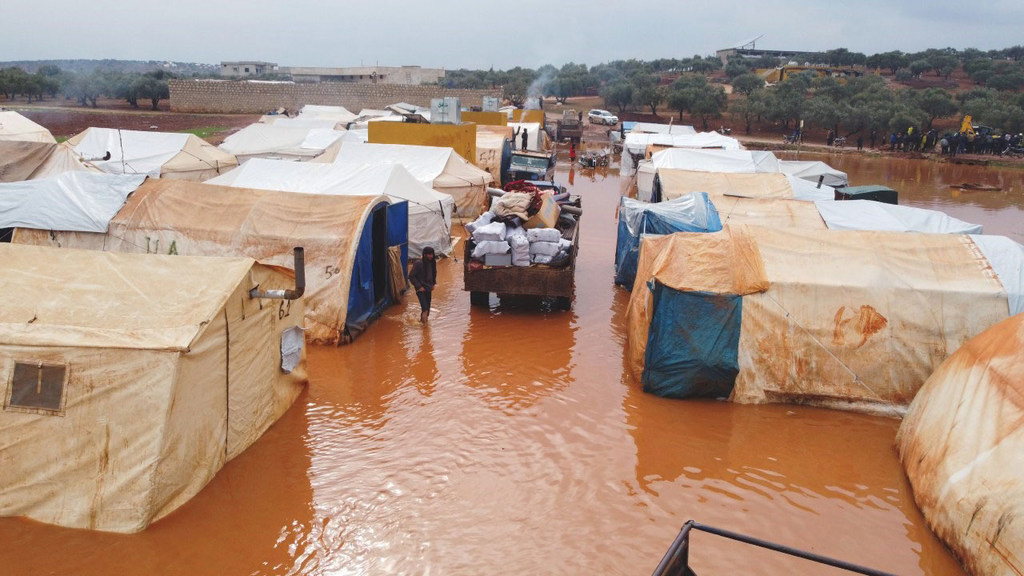 Humanitarian staff have been working “round the clock” to reopen access roads and provide emergency relief from the disastrous impact that recent floods have unleased on displaced people living in camps in northwest Syria, the UN’s deputy humanitarian coordinator there said on Friday.

Providing shelter, food, clean water and other relief supplies is “a massive undertaking…[that] will continue for months”, Mark Cutts told a press briefing in Geneva.

“The reality is that people in this area are facing a catastrophic situation. People in these camps are desperate, and humanitarians are overwhelmed by a crisis that the United Nations warned was coming”, he spelled out. 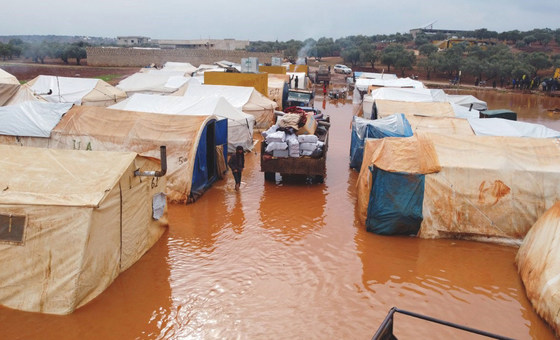 Against the backdrop of torrential rains and strong winds in northwest Syria as humanitarian workers try desperately to reach affected communities, latest reports indicate that one child was killed and at least three people injured.

Some 121,000 people in 304 sites were badly affected and more than 21,700 tents damaged or destroyed, according to the Office for the Coordination of Humanitarian Affairs (OCHA).

“I am deeply concerned about the devastating impact that the recent floods have had on displaced people living in camps in northwest Syria”, said Mr. Cutts.

He pointed out that people who were already struggling to survive had many of their food stocks, household goods and other meagre possessions, washed away.

The UN official painted a picture of contaminated water; below-freezing temperatures; children, elderly and pregnant mothers stranded in muddy remote areas; and thousands cut off from all services and support for days.

Overall, there are around 2.7 million displaced in the last rebel-held region of Idleb and other parts of northwest Syria – including 1.6 million spread out in over 1,300 camps and informal sites – and there are not nearly enough health facilities, schools or other essential services for everyone, according to the OCHA official.

“Just last year, one million people in this area were displaced by fighting. Many of them are still living under olive trees on roadsides, as there are simply not enough camps for all these people”, he elaborated, noting that “the international response has not matched the scale of the crisis”.

And between the ongoing fighting, displacement, worsening economic crisis, COVID-19, freezing temperatures and now floods, “it is a crisis that is getting worse and worse”, Mr. Cutts told the journalists.

Apart from the flooding, as of 26 January, some 21,000 cases of COVID-19 have been confirmed in northwest Syria.

“Despite a reduction in new cases, the number of deaths…increased by some 46 per cent to 380 since mid-December”, he updated.

As Syria approaches its 10th year of conflict, 12 million people have been forced from their homes, making it the biggest displacement crisis of this century, the UN official said.

And although shelling and other open hostilities remain significantly lower compared to this time last year – before the ceasefire – artillery and similar bombardments have continued to impact communities, causing casualties across the northwest throughout January, including in the Idleb area.

“What is needed above all else is an end to the conflict”, stressed Mr. Cutts. “But in the absence of a political solution, we must ensure the necessary access and funding for the ongoing humanitarian response”.

“However big the humanitarian crisis may be, everyone agrees that the solutions are ultimately political, not humanitarian”, he concluded.