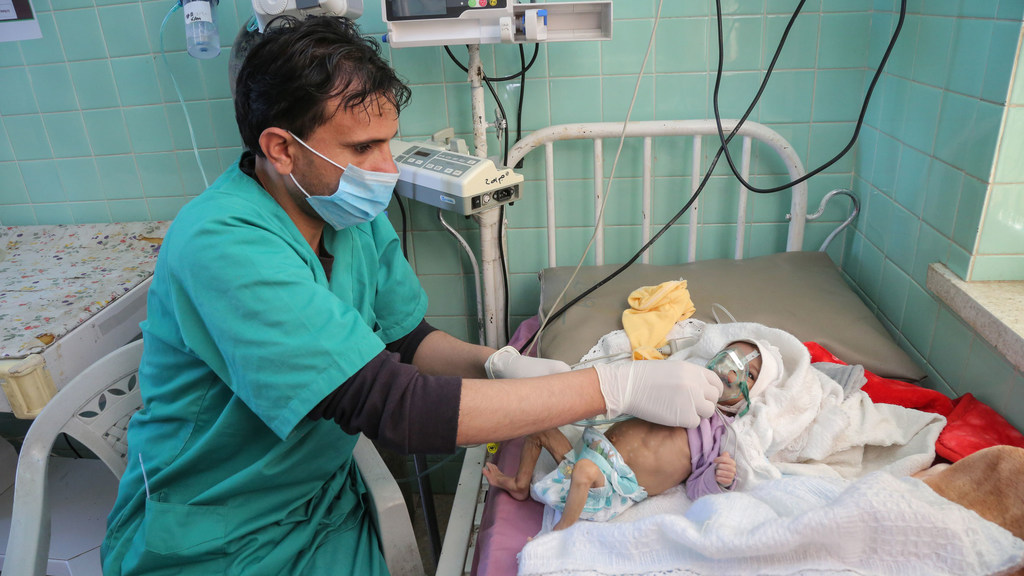 Since the escalation of conflict in 2015, severe acute malnutrition is among its highest levels in Yemen, threating the lives of half of the country’s children under the age of five, four UN agencies warned on Friday.

Nearly 2.3 million children under-five are projected to suffer from acute malnutrition this year, 400,000 of whom could die if they do not receive urgent treatment.

“The crisis in Yemen is a toxic mix of conflict, economic collapse and a severe shortage of funding to provide the life-saving help that’s desperately needed”, said World Food Programme (WFP) Executive Director David Beasley, calling the high numbers “yet another cry for help” from a country where “each malnourished child also means a family struggling to survive”.

“But there is a solution to hunger, and that’s food and an end to the violence”, he added. “If we act now, then there is still time to end the suffering of Yemen’s children”.

Malnutrition damages physical and cognitive development, especially during the first two years of a child’s life, according to the report.

Though largely irreversible, it perpetuates illness, poverty and inequality.

Although preventing addressing the devastating impacts of malnutrition start with good maternal health, some 1.2 million pregnant or breastfeeding women in Yemen are projected to be acutely malnourished in 2021.

“The increasing number of children going hungry in Yemen should shock us all into action”, said UNICEF Executive Director Henrietta Fore. “More children will die with every day that passes without action”.

Years of armed conflict and economic decline, the COVID-19 pandemic and a severe funding shortfall for the humanitarian response are pushing exhausted communities to the brink, the UN agencies flagged.

With rising levels of food insecurity, many families are having to reduce the quantity or quality of their food, or both.

“Families in Yemen have been in the grip of conflict for too long, and more recent threats such as COVID-19 have only been adding to their relentless plight”, said FAO Director-General QU Dongyu.

“Without security and stability across the country, and improved access to farmers so that they are provided with the means to resume growing enough and nutritious food, Yemen’s children and their families will continue to slip deeper into hunger and malnutrition”.

Each year of conflict has brought a surge in acute malnutrition among young children and mothers, with a significant deterioration during 2020.

Driven by rising food insecurity and high rates of disease, such as diarrhoea, respiratory tract infections and cholera, Aden, Al Dhale, Hajjah, Hodeida, Lahj, Taiz and Sana’a City – among the worst hit governorates – account for over half of expected acute malnutrition cases this year.

Against the backdrop that “diseases and a poor health environment are key drivers of childhood malnutrition”, WHO Director-General Tedros Adhanom Ghebreyesus, pointed out that “malnourished children are more vulnerable to diseases”.

“It is a vicious and often deadly cycle, but with relatively cheap and simple interventions, many lives can be saved”, he added.

At the same time, the humanitarian response remains critically underfunded, having received only $1.9 billion of the $3.4 billion it required for 2020.