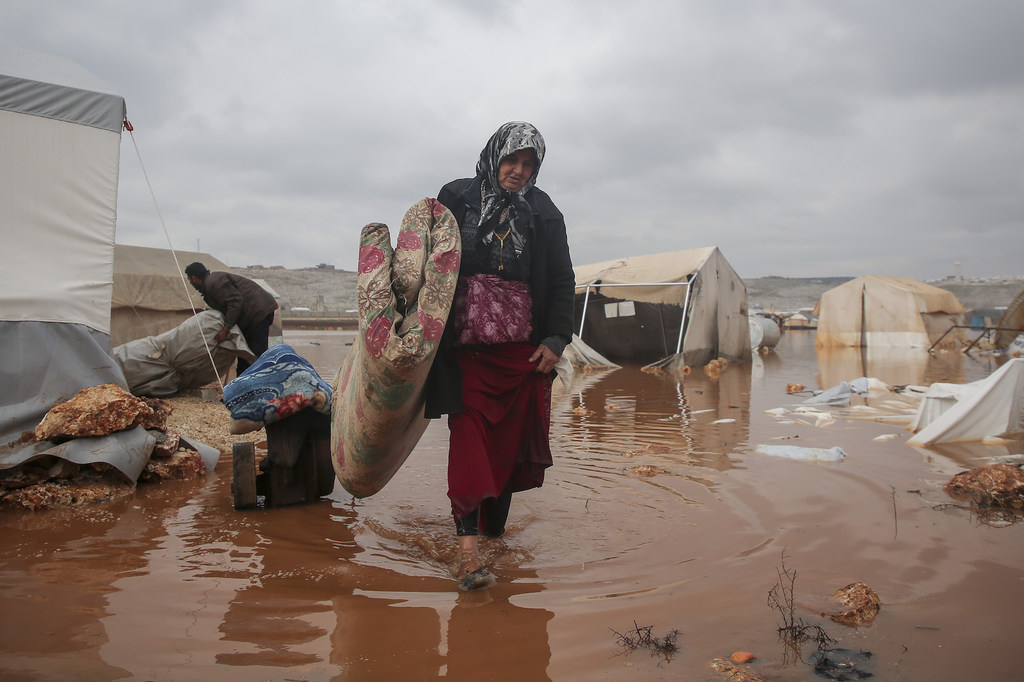 Heavy rains and floods in north-west Syria has worsened the plight of tens of thousands of internally displaced persons, destroying their tents, food and belongings in the midst of winter, the UN Office for Coordination of Humanitarian Affairs (OCHA) said on Tuesday.

At least 196 IDP sites in Idlib and Aleppo reportedly sustained damage, with many roads leading to the camps cut off by heavy rains between 14 and 20 January, the Office said in a humanitarian bulletin.

“Thousands of people have been temporarily relocated, many requiring shelter, food, and non-food item support immediately, and in the long term”, OCHA said.

“The rain and low temperatures highlight the continued need for fuel and heating, winter clothes, blankets, food, livelihoods, and water, sanitation and hygiene”, it added.

Without sufficient “winterization” – preparing shelters and camps to withstand the harsh conditions and keep occupants warm – people in need could resort to negative coping mechanisms, such as burning unsafe materials for heat, raising the risk of fire outbreaks and toxic fumes, OCHA said.

The likelihood of accidental fires is increased by challenges in accessing safe fuels, as a result of scarcity and high prices of fuel as well as the general economic deterioration in northwest Syria, it added.

In the past month, some 17 fire incidents were reported that affected 28 households, destroyed 28 tents, resulting in one death and seven injuries.

Meanwhile, ongoing fighting in the region continues to take a toll on civilians, especially near near the M4 and M5 highways – two key arteries linking the capital Damascus with Aleppo city and much of northern Syria.

A number of civilian casualties – including children – have been reported due to artillery shelling or improvised explosive devices (IEDs) or unexploded ordinances (UXOs). Some incidents occurred in residential areas or at local markets, raising risk for civilians, OCHA said.

UNICEF/Khaled AkachaA child stands next to a woman as she makes a makeshift wall to prevent floodwater from entering her tent at an IDP camp in north-west Syria, in January 2021.

Continued hostilities, new and protracted displacement and a sustained erosion of communities’ resilience after a decade of conflict, has left millions in desperate need of assistance.

Across Syria, an estimated 13 million people – over 70 per cent of the population – are expected to require aid in 2021. The UN estimates that 10.5 million people will be targeted with humanitarian assistance through the year at a cost of $4.2 billion, which is a 10 per cent increase compared to 2020.