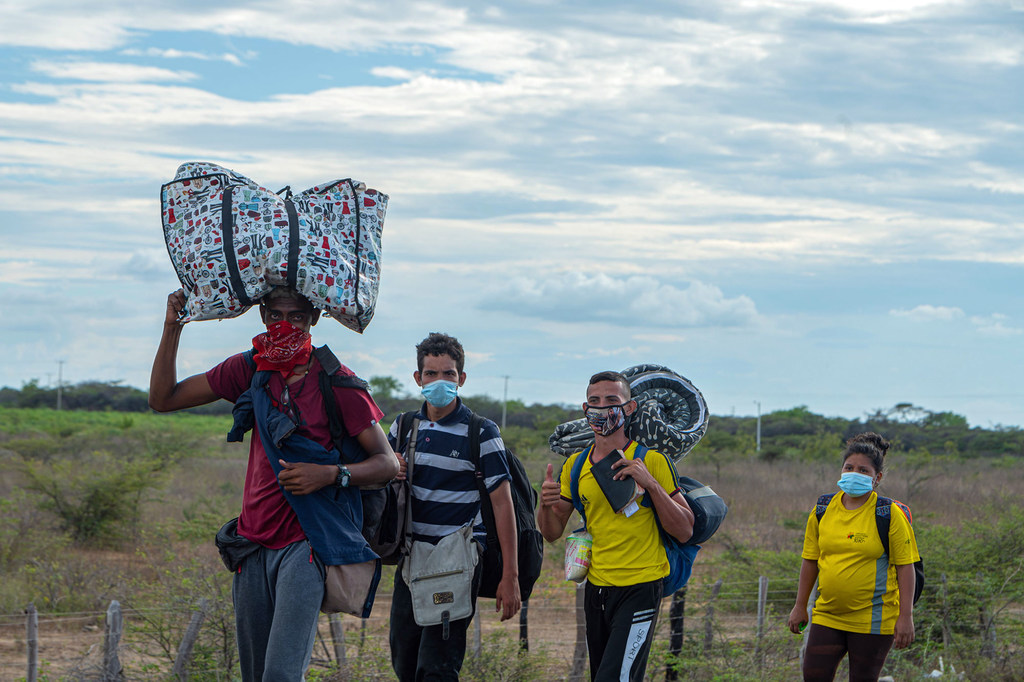 Vulnerable Venezuelan migrants and refugees who have been hit particularly hard by the COVID-19 health and socio-economic crisis, urgently need greater support from the international community, UN humanitarians said on Friday, ahead of a donor conference hosted by Canada next week.

Since 2015, some 5.6 million Venezuelans have left the country to escape violence, insecurity and threats, as well as a longstanding economic crisis which has led to a lack of food, medicines and essential services, according to the UN refugee agency, UNHCR.

Some 2.5 million have settled in the Americas, where most were self-sufficient until the pandemic hit, resulting in lost jobs, evictions and a rise in gender-based violence.

“The facts for Venezuelan refugees and migrants are stark: over half don’t have enough to eat, 80 to 90 per cent have lost their source of income, one in four children are separated from their families during the journey, and many women and girls face particular challenges, such as gender-based violence and lack of access to sexual and reproductive health services,” said Michael Grant, Assistant Deputy Minister for the Americas at Global Affairs Canada via Zoom.

The 17 June donors’ conference – co-hosted by UNHCR and the UN migration agency IOM – comes as humanitarians warned that the onset of winter in Latin America has made matters worse for desperate Venezuelans. The total ask is $1.44 billion.

An estimated one in four Venezuelan children has become separated from one or both parents, while one in three goes to bed hungry. Close to two-thirds have not been able to continue their studies during the pandemic, UNHCR said.

Datasets compiled in the last year, also indicate that women have become the target of an alarming increase in domestic violence, sexual harassment and abuse, negative coping mechanisms including survival sex, as well as human trafficking.

There has also been a near 70 per cent increase in murders of Venezuelan women during the pandemic – from 31 cases in 2019 to 52 between March and November 2020 – UNHCR said, citing the National Institute of Legal Medicine and Forensic Sciences.

“People are still crossing, they’re very much estimates, because the borders are closed and people are using irregular crossing points; but we are looking in the past few weeks at 2,000 Venezuelans a day getting into Colombia”, said Marie-Helene Verney, UNHCR Head of Operations for the Venezuela Situation.

“We’re seeing a lot – and I mean a lot – of women with children on their own coming out at the moment. Then what? Then they arrive and because they have entered irregularly, it can be very difficult if not impossible for them to get regular status.”

She added: “What’s been incredible since the start of COVID in a region where we had a vast majority of refugees and migrants – let’s say 80, 85 per cent were self-reliant – not necessarily living very well, but at least self-reliant – COVID has had absolutely the reverse effect, that now we’re looking at a population that’s really dependent on humanitarian assistance.”

According to UNHCR, older persons – often the major breadwinner – face additional hardship since almost half have lost their jobs. Prior to the pandemic, one in four skipped meals. Since COVID-19, more than four in 10 have had to cut back on the amount they eat.

One of the aims of the pledging conference will be to highlight the significant efforts made by host countries in Latin America to respond to the unprecedented exodus from Venezuela, which remains the world’s second biggest displacement crisis after Syria.

Concerns for the region are growing amid predictions by institutions including the International Monetary Fund (IMF) and the World Bank, of an economic contraction of eight per cent in South America over the next two years, the worst economic recession in 120 years.

Highlighting the threat posed by COVID-19 and protection gap for Venezuelan migrants and refugees, UNHCR noted that nearly two million of them had settled in Argentina, Bolivia, Brazil, Chile, Paraguay, Peru and Uruguay – countries with some of the highest coronavirus infection and death counts globally.

“Venezuelans have mostly been included in national health responses, but with hospitals operating at full capacity, access to treatment for other illnesses, including those associated with the winter season, has become ever more challenging,” the UN agency said in a statement.

“What we are trying to help governments achieve as well is how to prevent Venezuelan refugees and migrants from using irregular paths and falling in the hands of people who exploit them in order to facilitate their crossings into neighbouring countries,” said Eduardo Stein, Joint UNHCR-IOM Special Representative for Venezuelan refugees and migrants.

“While COVID-19 continues to devastate the region, the arrival of winter threatens to expose Venezuelans to unspeakable hardship. Despair is already deepening, and negative coping mechanisms are on the rise,” said Juan Carlos Murillo, Representative of the Regional Office for Southern Latin America. “Despite the commendable efforts of hosting countries to reduce suffering, more support is required to face the soaring needs.