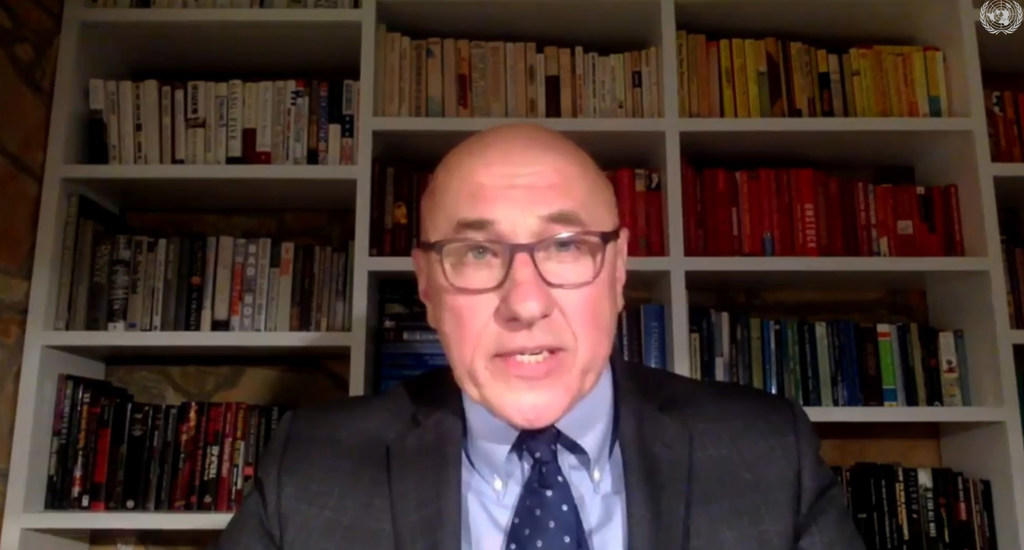 Calling for a united global response, Special Rapporteur, Thomas Andrews said that “the people of Myanmar need not only words of support but supportive action. They need the help of the international community, now”.

According to the independent rights expert, appointed by the Council with a three-year unpaid mandate, Wednesday’s UN Security Council statement expressing ambassadors’ deep concern about developments in Myanmar are welcome words, but, “they are wholly insufficient.”

Mr. Andrews – a former Maine Congressman – stressed that a growing body of reporting indicates that the junta’s security forces are committing acts of murder, imprisonment, persecution and other crimes as part of a coordinated campaign, directed against a civilian population, in a widespread and systematic manner, with the knowledge of the junta’s leadership – thereby likely meeting the legal threshold for crimes against humanity.

“Credible reports indicate that, as of today, Myanmar security forces have murdered at least 70 people.

“The junta is detaining dozens, sometimes hundreds, every day. As of last night, the total number of arbitrary arrests and detentions since 1 February had risen beyond 2,000, and the violence against protesters, including violence against people sitting peacefully in their homes, is steadily increasing,” Mr. Andrews added.

“The people of Myanmar are desperate. They are upholding and defending the highest principles of this body and the United Nations, including their commitment to non-violence.  But these principles, and their very lives, are under vicious attack”.

In a report to the Council, Andrews details how the Myanmar military illegally overthrew the civilian government in early February and proceeded to attack the people of Myanmar by committing murder, assault and arbitrary detention. He also details human rights violations preceding the coup in an annex to the report.

With the Security Council seemingly unwilling to invoke its Chapter VII authority, Andrews said Member States must rally together to take action.

The Special Rapporteur outlined five options that such a coalition could take immediately:

1. Stop the flow of funds to the junta, including by imposing targeted sanctions on the junta’s business enterprises and on Myanmar Oil and Gas Enterprise, the single largest source of revenue to the State of Myanmar.

3. Ensure accountability for the crimes, through national courts using universal jurisdiction if the Security Council is unwilling to refer the matter to the International Criminal Court.

5. Deny recognition of the military junta as the legitimate government representing the people of Myanmar.

In response to the report, Chan Aye, Permanent Secretary of the Ministry of Foreign Affairs of the Republic of the Union of Myanmar said that the State Administration Council, (SAC) “did not abolish the State Constitution and it has made its commitment to consolidate the genuine, disciplined multi-party democratic system that suits the prevailing situation of the country as aspired to by the people of Myanmar.”