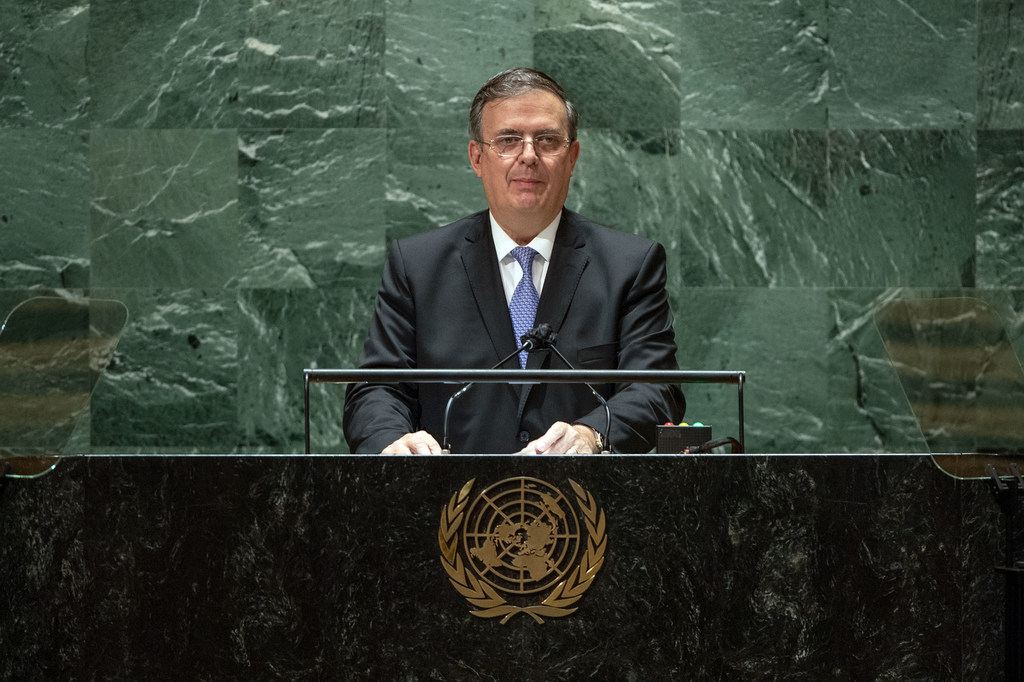 In his address to the high-level debate at the UN General Assembly on Thursday, Marcelo Ebrard, the Secretary of Foreign Affairs of Mexico, reaffirmed his country’s commitment against discrimination and hate speech and called for more solidarity.

Mr. Ebrard said that the economic recovery from the crisis resulting from the COVID-19 pandemic, has been marked by inequality. “The pandemic has highlighted the need for a strong and effective multilateral system”, he declared, calling for more solidarity between states.

“This unprecedented crisis cannot be overcome with unilateral or isolated actions, but rather through renewed cooperation and genuine international solidarity”, Mr. Ebrard underscored.

Speaking on the need to guarantee universal and equitable access to medicines, vaccines against COVID-19 and other medical supplies, Mr. Ebrard said this was an “urgent priority”.

Noting that while 33 per cent of the global population in high-income countries has already received at least one dose of the vaccine against COVID-19, only 1.4 per cent of people in low-income countries have had access to a vaccine, the Secretary of Foreign Affairs declared that “we need to promote vaccines being considered as global public goods”.

“The discrimination in the recognition of vaccines jeopardizes socioeconomic recovery, and the efficacy of mechanisms such as the COVAX platform”, he told world leaders during his in-person address to the Assembly.

The annual gathering is being held in a hybrid format, with in-person and online speeches, after being forced almost entirely online last year because of the pandemic.

In his speech, Mr. Ebrard referred to one of the subjects that deserve more attention in Mexico: migration and went on to highlight Mexican’s long tradition of solidarity with people who need assistance for humanitarian reasons.

“This is why we have granted international protection to people from Afghanistan who find themselves in a situation of extreme vulnerability, particularly to women and girls”, he added, and urged all to recognize that migration had benefited all societies at some point in their historic development.

Mr. Ebrard reaffirmed that it is a global responsibility to respect and defend the human rights of all persons, regardless of their migratory quality, and called for a safe, orderly and regular migration based on international cooperation.

In this sense, the Secretary of Foreign Affairs reaffirmed Mexico’s commitment to continue fighting hate speech, discrimination, xenophobia, racism, and other related forms of intolerance and violent extremism, including white supremacy.

“These countries, where Mexico is included, represent 75 per cent of the global population and are home to 62 per cent of people in situations of poverty”, he stated.

In this context, Mr. Ebrard called on international financial institutions, international banking, the private sector and all relevant actors in the field, to promote measures that prevent other countries from incurring in unsustainable levels of debt and managing to direct their scarce resources to the socioeconomic recovery from the crisis.

Mr. Ebrard went on to reiterate Mexico’s aim to promote a more equitable, fair and equalitarian society, highlighting the feminist foreign policy adopted by Mexico in 2020.

He stressed that peace is only possible if women and girls participate actively in its consolidation.