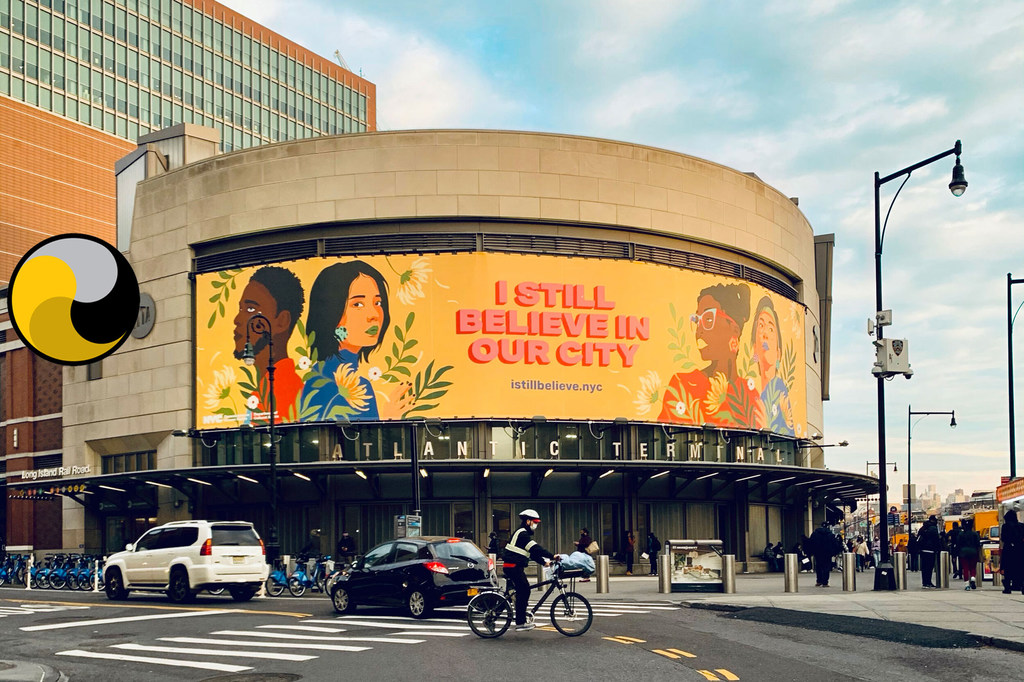 The rise in hate crimes against people of Asian and Pacific Island heritage in the United States since the beginning of the COVID-19 pandemic, inspired artist Amanda Phingbodhipakkiya to produce vibrant artworks featuring people of Asian heritage. Displayed in public spaces around New York City, the images, and the messages they convey, have made headlines around the world.

Brightly coloured posters, murals and displays appeared at bus stops, in subway stations and on landmark buildings across New York City in the Spring of 2021, part of a project commissioned by the City’s Commission on Human Rights called “I Still Believe In This City”, featuring works by Ms. Phingbodhipakkiya, the Commission’s artist-in-residence.

‘They lift us up as guardians’

Ms. Phingbodhipakkiya, an American neuroscientist turned artist, born in Atlanta to Thai and Indonesian immigrants, has long had a high profile in the art world, and her explorations of feminism, science, and community have often gone beyond galleries and media outlets, to protests and rallies, as well as on buildings and highway tunnels.

But her artistic response to the rise in anti-Asian hate since the COVID-19 pandemic has brought her a much wider audience: “I Still Believe In This City” has been covered by a host of major media outlets, including the cover of the renowned Time magazine, reflecting a new awareness of anger and violence directed towards Asian-Americans.

Whilst the works, which feature images of people of Asian and Pacific Island heritage, communicate positivity and an upbeat outlook, the accompanying text gives the viewer a different perspective, containing information about the darker context that inspired these pieces, such as “This is our home too”, “I am not your scapegoat”, and “I did not make you sick”, the latter slogan reflecting the targeting of people of Asian heritage, on the unfounded basis that they are primarily responsible for spreading COVID-19.

Ms. Phingbodhipakkiya says that the figures portrayed in the posters and murals represent “resilient, hopeful guardians, in the face of these horrible attacks against our community. They lift us up as guardians, keeping us safe, encouraging us to stand up for our rights”.

The public art exhibition has been praised by UN Human Rights Minority fellow, Derrick León Washington, a New York-based cultural anthropologist, dancer and curator, who believes that art is crucial to promoting human rights: “art like Amanda’s is an important way to start difficult conversations. It is connected to lived experiences, and helps us to reach and touch different communities.”

The artworks, says Mr. Washington, “speak to the defiance of Asian-Americans in the face of anti-Asian violence. However, this is not just a New York or US story, and the UN Secretary General has expressed “profound concern” over the rise in similar attacks worldwide.”

“Racism against Asians and Pacific Islanders is not a new phenomenon”, says Carmelyn Malalis, chairperson of the New York City Commission on Human Rights. “We all have stories from our youth, but it’s true that last year was particularly bad, because of the pandemic.”

Ms. Malalis points out that increased levels of anti-Asian hate took place in the context of a rise in all forms of racism, in New York and beyond. “In the past year the Black Lives Matter movement has been fighting against anti-black, and now anti-asian, antisemitic and other forms of xenophobia. This is a highly diverse city, and we want to see solidarity between all of our different communities”.

May we know our own strength

At the same time as the “I Still Believe in This City” artworks were being displayed in New York City, Ms. Phingbodhipakkiya launched another, more sombre piece, also in collaboration with the NYC Commission on Human Rights, entitled “May we know our own strength”. It grew out her reaction to a mass shooting in March 2021, which resulted in the death of eight people, six of whom were women of Asian descent.

“This installation slowly developed from shared stories of violence against Asian-Americans and Pacific Islanders (AAPI), but was open to anyone going through something difficult; it was a space for them to lay down their burden”.

Survivors of assault and other forms of abuse anonymously posted their stories, often deeply personal and harrowing, to an online submission form. Each submission activated a printer in the storefront, which relayed the stories onto ribbons of paper, whilst activating an incandescent lightbulb. Ms. Phingbodhipakkiya then weaved the stories into intricate hanging sculptures.

The artist says that she hopes the exhibition helped to transform the pain and loss of each story into “a new pathway for peace and gentleness, and a new way forward.

“So often”, she adds “when we see atrocious acts, we turn away. But, by shutting the door on others, we shut the door on our own humanity. Art can bring it back.”

This article is one of a series of multimedia features published as part of the commemorations surrounding the twentieth anniversary of the UN’s Durban Declaration, considered to be a milestone in the global fight agains

First Person: A life dedicated to indigenous rights in Brazil

First Person: A life dedicated to indigenous rights in Brazil