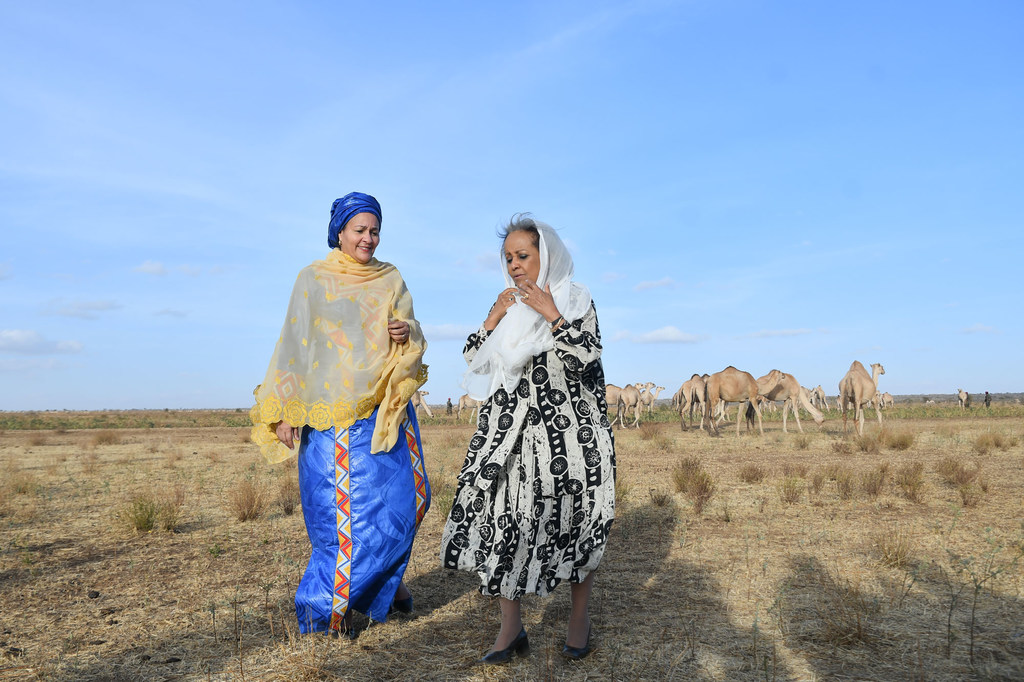 From survivors of rape to young women entrepreneurs, the UN Deputy Secretary-General has spent the week meeting some of those whose lives have been upended by conflict in Ethiopia, but also hearing stories of hope that point towards the “indispensable” value of a return to lasting peace across the African nation.

Following the African Union Summit on Saturday, where she represented the Secretary-General, Amina Mohammed left on Sunday for Amhara, one of northern regions affected by the violence which erupted in November 2020, between Government forces and those allied with separatists in Tigray.

She met with a range of people, including the Vice President of Amhara, and witnessed first-hand how the United Nations is trying to assist those most in need.

“There is a lot of work that has been done here for us to try to help the people of Amhara. But what is clear is that the price for conflict is too high, and therefore, peace is indispensable”, she said, offering the Organization’s continued support.

Across all three conflict-affected regions of the north, more than nine million people now need humanitarian food assistance, the highest number so far, since the conflict began.

Throughout the day, she saw how hospitals, markets, schools and farms have been destroyed by conflict over the last 15 months, and saw for herself the hardship being faced by local people as a result.

She met with a group of students from a high school in Kombolcha, badly damaged during the fighting. Until very recently, the school, established 45 years ago, was considered one of the best in the country.

But then war came.

Speaking to Ms. Mohammed, a student leader recalled how devastated they were when they found out their classrooms had become the latest casualty of the conflict.

“The high school has produced a lot of people who have made remarkable contributions to the country and earned respect from Ethiopians. Members of the community contributed from their meagre income, to add more facilities to the school, so that we get quality education”, the student recalled.

Now, she said, none of them can make any contribution to rebuilding and furnishing new study areas, as they are struggling to make ends meet.

“We need your support to rebuild our school”, she said.

The Deputy Secretary-General then left Amhara for Tigray, where the clashes first erupted between federal Government troops and forces loyal to the Tigray People’s Liberation Front (TPLF).

She discussed options for a peaceful resolution to the fighting, with the regional President, and the benefits that would present to all Ethiopians, and also visited Ayder Hospital.

The health centre, located in the capital of the region, Mekelle, is supported by the UN Population Fund (UNFPA), the sexual and reproductive health agency, and provides holistic support for rape survivors.

“This is an experience, to see the whole of the psychological effects and physical effects of rape on women – the care”, Ms. Mohammed said.

For her, the most heart-breaking part of the visit were the individual stories of survival.

“Those stories need to be told. We need to know that in conflict, there are no winners. In fact, those that this falls most on, are women and children”, she said.

UNECA/Daniel GetachawWomen in Amhara, affected by the armed conflict, share their traumatic experiences in an emotional exchange with Deputy Secretary-General Amina Mohammed.

The Deputy Secretary-General met one of the doctors, who recalled how gloves used to be abundantly available, but now the supply is simply running out.

“We wash them over, sterilize them and send them back to use again. The same thing with the test tubes. We ran out of test tubes with anticoagulants. So, we are trying to reprocess them”, he said.

Ethiopia has managed to maintain one of the lowest rates of HIV in East Africa, but that work has now become much harder.

In the last few months, many kits for HIV diagnosis have expired. The team is now trying to check whether they can still be used. In the meantime, they received the go ahead to use what they have, because there is no alternative.

“Doctors have found it so difficult to get used to this situation. this is a man-made conflict. We are hoping to scale up and take care of them a little bit more”, the doctor said.

On Monday, Ms. Mohammed visited the conflict-affected region of Somali, where she was joined by Ethiopia’s President, Sahle-Work Zewde.

Along with three other lowland regions, Somali is currently suffering from a prolonged drought. Water wells have dried up, killing livestock and crops, and pushing hundreds of thousands of children and their families to the brink.

The relentless drought will leave more than 6.8 million people in need of urgent humanitarian assistance by mid-March.

UNECA/Daniel GetachawDeputy Secretary-General Amina Mohammed (centre) visits a hospital in Mekelle and meets medical staff who are forced to reprocess and reuse basic healthcare items that are rapidly running out of stock.

The UN Resident and Humanitarian Coordinator in Ethiopia, Catherine Sozi, told UN News that, in 2021, allocations by the organization to Somali region for aid to those most in need was over $18 million. An additional $20 million will be allocated to the region this month.

“In addition to providing humanitarian assistance, we are looking at the reasons why people are being displaced in the first place and will find long-term sustainable solutions, addressing the root causes”, she explained.

During her time in Somali, the Deputy Secretary-General met with the President of the region, but also pastoralists, displaced people, and community leaders.

One of those displaced, is Nimu Mohammed, 45 years old, and a mother of nine.

She recalled how she lost livestock and pasture, and, as the drought got worse, she was forced to leave her village with her three younger children, leaving behind the other six.

In Kebrebeyeh, she found a welcoming community, despite the difficulties they all face.

“They are sharing with us what they have. However, the challenges of the drought are beyond the capacity of our host community. We need food, water and other essential support immediately”, she said.

UNECA/Daniel GetachawDeputy Secretary-General Amina Mohammed was welcomed by Ambassador Mehereteab Mulugeta, Chief of Cabinet of Ethiopia’s Ministry of Foreign Affairs upon her arrival in Addis Ababa to participate in the 35th African Union Summit.

Underscoring the impact of climate change, the Deputy Secretary-General encouraged the region’s president to look beyond agriculture, to innovations that could increase water supply and help restore prosperity to the area.

She also commended the Somali people for maintaining peace across their region, noting that they provided an example for other countries in Africa and the world to follow.

Ms. Mohammed’s hope is that the trip will highlight the existing needs; and that future partnerships can bring more investment, not just aid to the region.

On Tuesday, she returned to the country’s capital, Addis Ababa, to hear the stories of young women entrepreneurs.

They are all part of a Creative Hub supported by the UN Industrial Development Organization (UNIDO).

Speaking to the women, she reminded them of the strength they possess through sticking together and supporting each other.

“What I like about the spirit here is you are not waiting for anyone to tell you how to do it. You are just saying, ‘give me the opportunity to create the environment and I can do it. I can grow it. I can be so much bigger and better.’ And this is exciting”, Ms. Mohammed said.

One of the participants in the meeting was Lidia Million, Founder and General Manager of Linu Manufacturing PLC, a company that produces leather products.

After overcoming many challenges to become competitive in the international market, she and nine other entrepreneurs formed an association known as LOMI, inspired by the Amharic proverb “50 lemons, a burden for one person but jewellery for 50.”

“Working under this cluster has helped us a lot”, she said, explaining how the hub facilitated access to training, new technologies, facilities, markets and networks.

“That make us competitive in the international market and collectively respond to the growing demands to our products”, she added.

Listening to their stories, looking at the faces filled with excitement, what Ms. Mohammed saw was hope, she said, a belief that “the powerhouse of Ethiopia can be felt on the continent and beyond in other regions.”