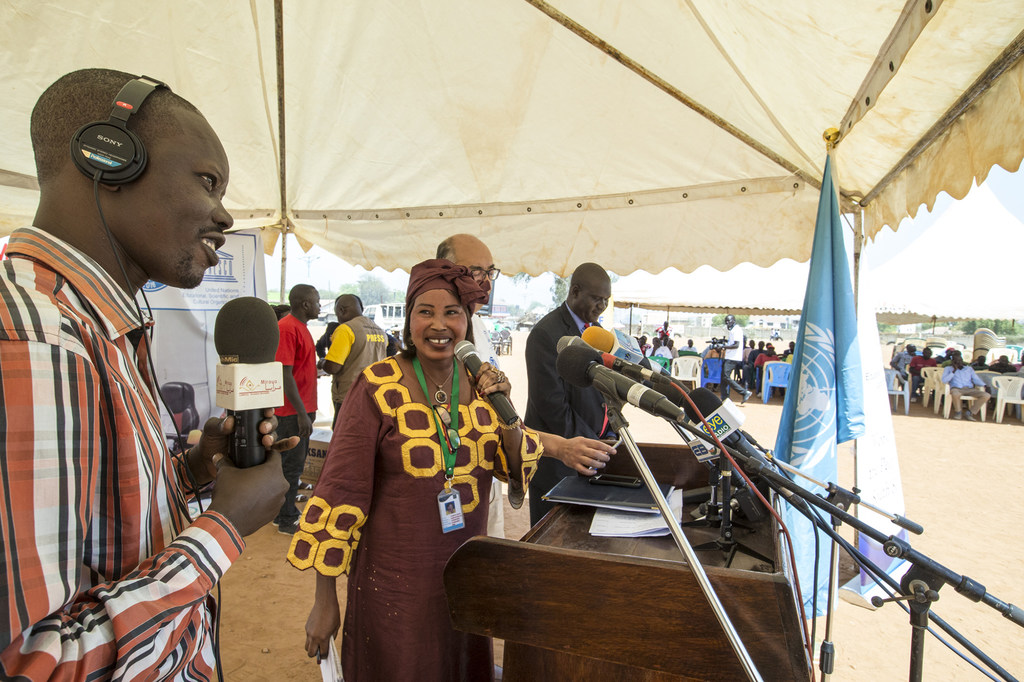 Although internal conflict erupted within the world’s youngest country after independence in 2011, Radio Miraya, the news service launched by the UN Peacekeeping Mission in South Sudan in 2005, has stuck fast to its original mandate of trying to bring the country together, becoming the most popular and trusted source of information in the country to this day.

To mark this year’s World Radio Day, UN News spoke to Gabriel Joseph Shadar, a South Sudanese radio producer at Radio Miraya, about the important role that the station plays this young nation as it re-adjusts to life in the aftermath of the landmark 2018 peace agreement, which formally ended five years of civil war, but remains fragile.

“All South Sudanese will tell you they love radio, especially those who were born in the sixties and seventies, before social media. When the UN peacekeeping mission came to the country, I joined Miraya, and radio has become my life for the last 15 years.

In South Sudan, much of the population is living in the rural areas, where there isn’t a strong internet service, newspapers are rarely circulated, and there is no TV coverage.

So, the easiest means to get information is radio: you just have to have batteries and it’s there. You can listen on your farm, while you are following your cattle somewhere, and your life is going on. Many of the people in South Sudan don’t read and write, so they rely on hearing what we are broadcasting.

Radio Miraya, the biggest network in South Sudan by far, informs, educates and entertains. It is mostly in English, but we also have programming in Arabic, the lingua Franca on the streets.

We make sure to include the voices of normal people, but we are also making a link and a bridge between the officials and the citizens, to allow the latter to receive information, and for the former to get feedback from those they represent.

We cover a wide range of topics, including many that other radio stations cannot; from politics, to lifestyle, youth issues, and gender issues. We also have serious debates every Saturday.

70 per cent of the music we play is South Sudanese, and we promote a lot of local musicians, as well as musicians from neighbouring regions, other parts of Africa, and the rest of the world.

Other programmes showcase the work of the different units of the mission. For example, we have a program dedicated to the UN Police and the work they are doing to reduce crime, and another on promoting peace and resolving conflict.

There are health shows, a children’s programme, a youth forum three times in a week, and shows dedicated to women.

Coverage of the peace deal remains an important part of our output. We carry live coverage of important events taking place in the parliament, the presidential palace or the Council of Ministers, and we take the discussion shows to different regions, to raise localized themes.

Thanks to the station, many South Sudanese have been able to understand the conflict, the implementation of the peace deal, the humanitarian situation, and what’s going on with human rights and the protection of civilians.

Hate speech has been a major issue in the conflict. There is so much, from word of mouth and also from social media, especially coming from the diaspora outside of the country.

We have to address it day by day, and case by case. We have literally had to run counter-information to what is prevalent on the social media or what is being said on the street.

The hate speech has reached to the level of some people creating fake Facebook pages of our own station, and we had to contact Facebook many times to close them down.

The people creating these pages put up a lot of hate speech, and propaganda which does not reflect the image or the editorial policy of the station. People have even taken screenshots of false stories from social media, and posted them on our page, saying that we have reported them.

Many members of civil society organizations and bodies have dedicated themselves to fighting hate speech, and we have been reporting on their activities, bringing them on air to speak about the issue.

I think we have been successful, because we remain, up to now, one of the most trusted radio stations in the country.”