Some 12,000 households have been affected by the volcanic eruption and tsunami that hit the islands of Tonga over the weekend, according to estimates by the UN Office for the Coordination of Humanitarian Affairs (OCHA).

In total, about 84,000 people, more than 80 per cent of the population of the South Pacific Kingdom, have been affected by the disaster.

Besides the three fatalities reported earlier in the week, no further deaths have been confirmed.

In an update released on Thursday, OCHA confirms that the whole economically vital agricultural sector, including crops, livestock and fisheries, have suffered substantially.

The agency is particularly concerned with the effect of ashfall on crops along with saltwater intrusion, and the potential of acid rain.

Around 60 to 70 per cent of livestock-rearing households have seen their animals perish, grazing land damaged, or water supplies contaminated.

Fisheries operating across the more than 170 islands that make up the archipelago, have also been significantly affected and the Government has advised against fishing amidst the ongoing contamination, or consuming fish.

Initial Damage Assessments (IDAs) are underway on the main island, Tongatapu, as well as on islands of the Ha’apai group, by Tonga’s National Emergency Management Office (NEMO) and partners.

Most parts of the country, including remote and isolated islands, have also been visited by assessment teams, said OCHA.

So far, five communities in Tongatapu have been identified as having suffered significant damage to households in coastal areas. Around 31 houses are completely damaged, 72 severely, 46 moderately, and 23 suffered minor damage.

According to OCHA, there are still serious concerns about access to safe water and the quality of groundwater.

The capital’s water supply is safe to drink but most people are now relying on bottled water. Authorities have advised residents against drinking rainwater, until more information is available.

Another main issue going forward, according to OCHA, is monitoring the risk of infectious diseases.

There are also reports of a fuel shortage, but petrol supplies are coming as part of regular shipment and with some additional Australian Government support.

As regards to public health concerns, the hospital and the national pharmacy in the capital are intact and fully functioning. There are some reports, OCHA noted, of damage to some health centres in Tongatapu, ‘Eua and Ha’apai.

In terms of international connectivity, it is still limited, but the situation is gradually improving, the humanitarian coordination agency said.

Among other initiatives, a ship is on its way to fix the badly damaged underwater communication cable – the country’s sole fixed link to the outside world – but that work might take several weeks to be completed. Communication with outer islands remains very limited.

Through the Emergency Telecommunications Cluster, the World Food Programme (WFP) is helping the process of re-establishing communications, particularly telephone and internet services.

As explained to UN News, the agency is also supporting the food security and logistics clusters, working on assessing needs, priorities and other logistics aspects of the humanitarian response.

WFP has also activated its Donate Responsibly campaign to raise awareness on how people can donate in a responsible manner. 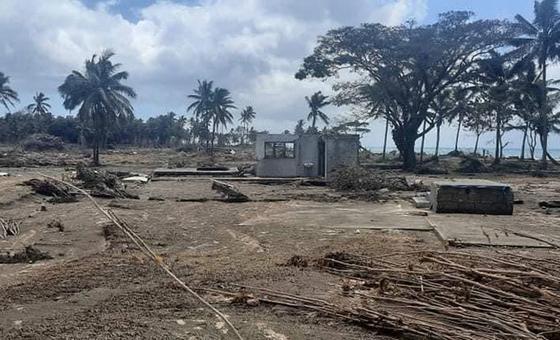 Damage caused in Tonga’s capital, Nuku’alofa, by the volcano eruption and subsequent tsunami on 15 January 2022. , by © UNICEF/Consulate of the Kingdom of Tonga

After being closed for several days due to ash on the runway, the debris at Fua’amotu International Airport has reportedly been cleared thanks to the tireless efforts of Tongan authorities, and it is now operational.

Relief flights from New Zealand and Australia arrived on Thursday, and a domestic flight departed for Ha’apai, confirming that the airport there was also operational.

The effects of the eruption and tsunami have also been felt across the Pacific, in Peru, where the UN country team is following the impacts of a tragic oil spill that resulted from the disaster, thousands of miles to the west.

According to authorities, the spill is impacting two natural reserves in the South American country, affecting livelihoods as well as life under and above water.

The volcanic eruption was the largest recorded in thirty years.

A huge, 20 km high mushroom cloud of smoke and ash was followed by a tsunami, and the eruption was heard as far away as Australia and New Zealand.

Waves as high as 1.2 metres hit the capital, Nuku’alofa, whose inhabitants fled to high ground, leaving behinds flooded houses, whilst rocks and ash rained from the sky.