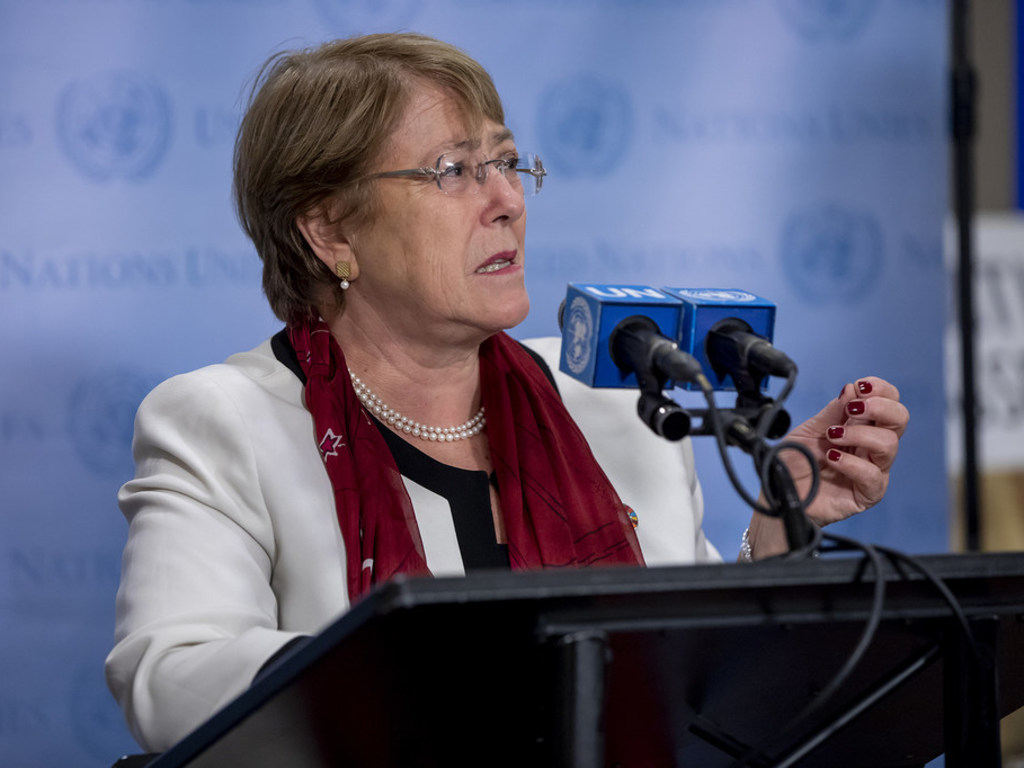 Amid increasing bloodshed and volatility in Gaza and Israel, UN Human Rights High Commissioner Michelle Bachelet on Saturday appealed for a de-escalation in tensions and urged all sides to respect international law.

“Over the past 10 days, the situation in the Occupied Palestinian Territory and Israel has deteriorated at an alarming rate,” she said in a statement.

“The situation in Sheikh Jarrah in occupied East Jerusalem, triggered by threats of forced evictions of Palestinian families; the heavy presence of Israeli Security Forces and violence around the al Aqsa mosque during Ramadan; the severe escalation of attacks from and on Gaza; and the shocking incitement to racial hatred and violence in Israel have all led to vicious attacks and mounting casualties in the Occupied Palestinian Territory and in Israel.”

Ms Bachelet added that “rather than seeking to calm tensions, inflammatory rhetoric from leaders on all sides appears to be seeking to excite tensions rather than to calm them.”

Meanwhile, casualties continue to mount in exchanges between the Israeli Defense Forces and those from the militant group Hamas, which controls Gaza.  On Saturday, UNICEF Palestine reported on Twitter that eight children were killed overnight in Gaza, and that so far 40 children there, and two in Israel, have lost their lives.

The UN Security Council will meet on Sunday morning to debate the crisis.  Secretary-General António Guterres and the UN Special Coordinator for the Middle East Peace Process, Tor Wennesland, will address ambassadors.

Ms Bachelet warned that the firing of large numbers of indiscriminate rockets by Palestinian armed groups into Israel, including densely populated areas, amounts to war crimes.

There are also concerns that some attacks by the Israeli Defence Forces in Gaza “targeted civilian objects that, under international humanitarian law, do not meet the requirements to be considered as military objectives.”

Her statement said failure to adhere to the principles of distinction, proportionality and precaution in conducting military operations “amounts to a serious violation of international humanitarian law and may constitute war crimes.”

“I urge both sides to ensure strict respect for their obligations under international law. Israel, as the occupying power, also has a duty to ensure unimpeded access to humanitarian assistance to the Gaza strip,” the UN rights chief said.  “Those found to be responsible for violations must be held to account.”

Ms Bachelet also called on the Israeli Government to take action against the “disturbing outbreak of violence” between ultra-right wing groups, including Israeli settlers, and Palestinian citizens of Israel, in several cities of the country.

She expressed particular concern over “the apparently highly organized nature of some attacks as well as inflammatory language that may amount to incitement to racial and religious hatred and violence.”

Reports also indicate that in some cases, organized convoys arrived from Israeli settlements in the West Bank to join local groups. Violent attacks have also been perpetrated by some Palestinian citizens of Israel.

She reminded the Israeli authorities of their duty to protect all residents and citizens, and urged political leaders to refrain from actions that will inflame tensions and instead work to prevent and address incitement to hatred and violence.

The High Commissioner was also deeply disturbed by the reported use of live ammunition by Israeli Security Forces during protests and clashes in the West Bank, resulting in the death of 10 Palestinians on Friday alone.

“We know from recent history how such a grave situation can advance with utterly catastrophic consequences for thousands of civilians,” she said.

“There can be no winner, no sustainable peace resulting from the furtherance of the cycle of violence. I urge all sides – and States with influence – to take immediate measures to ensure respect for international law, ease tensions, and work to resolve – rather than fan – the conflict.”