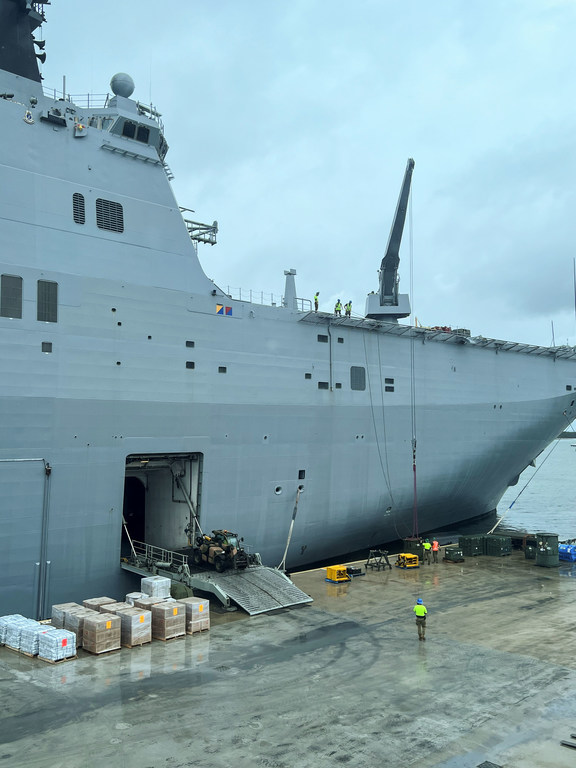 As news coverage of the eruption and tsunami that hit Tonga starts to fade away, the United Nations Coordination Specialist in the country has a message to the outside world: Tonga’s people are going to need sustained support responding to a disaster of this scale.

“The resources that we have in the ground are not enough”, Sione Hufanga explained, in an interview on Saturday morning local time, with UN News. “We ought to always look at the situation and ask, have we done enough, for this very small country, isolated in the Pacific islands?”

The underwater volcano eruption of a week ago, is believed to be the largest volcanic event to occur for 30 years.

The huge, 20 km high mushroom cloud of smoke and ash, and the tsunami that followed, affected 84,000 people, more than 80 per cent of the population of the South Pacific country.

In the last few days, the Kingdom has started receiving ships with humanitarian aid, and, with the runway now cleared of thick volcanic ash, the international airport is now open to flights with assistance.

Despite the positive signs of recovery, Mr. Hufanga warns that “the people of Tonga are still overwhelmed with the magnitude of the disaster.”

Only three people – so far – have lost their lives, but the specialist believes that number provides a somewhat misleading sense of security.

“Sometimes you can feel that it’s not as bad as it is, based on the fatalities, but that number represents the resilience of the Tongan community in such a disaster”, he said.

Speaking by cellphone, with most communications with the outside world still suspended, he explained that “most of the focus now is to serve the people who have been severely affected and need help with their essential needs in the next few days.”

The UN is working with the Government to finalize a needs assessment, that should be completed next week and will guide the immediate response and relief efforts.

“Water, sanitation, hygiene, schools, are among the things that will allow life to return to normal as soon as possible, but there is still a lot of ash that needs to be removed from those premises”, Mr. Hufanga informed.

UN agencies are in the field distributing dignity kits to the most affected people, food support, and trying to restart the agricultural sector.

The World Health Organization (WHO) is working with the Minister of Health providing medical teams to Ha’apai, one of the most affected islands, and other agencies, like the World Food Programme (WFP), are cooperating to help restore communication services.

For the UN specialist, the complete magnitude of the problems is still unknown. He points to damages to the agricultural sector or the marine resources as examples.

Around 60 to 70 per cent of livestock-rearing households have seen their animals perish, grazing land damaged, or water supplies contaminated. And, according to the UN Food and Agriculture Organization (FAO), the agricultural sector represents over 65 per cent of the country exports.

Fisheries have been significantly affected as well. The Government has advised against fishing amidst the ongoing contamination, or consuming fish.

“These are mid to long-term impacts that are yet to be understood”, Mr. Hufanga said.

Because of this, the specialist believes Tongans might have to rely on imported food for some time, something they have “never experienced before”

“Tonga never expected that such a disaster could put us in this very, very difficult situation”, he says.