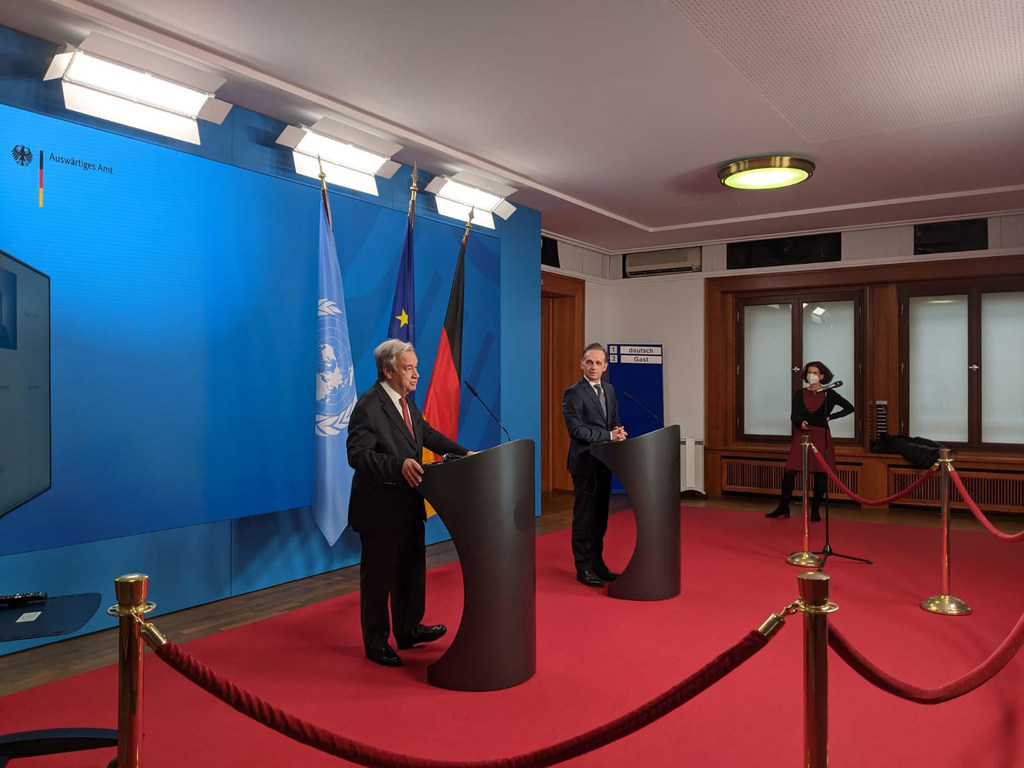 Throughout a challenging year, Germany has been a reliable, generous and “exemplary” friend to multilateralism, the UN chief told journalists on Thursday, speaking at the national parliament building in Berlin.

During a joint press conference with German Foreign Minister Heiko Maas at the Bundestag, Secretary-General António Guterres recalled a global UN survey of some 1.5 million participants, in which 99 per cent of Germans “affirmed their commitment to multilateralism, and international cooperation, to solve the problems of today’s world…by far, the largest percentage” of any one nation.

“And that shows the strong commitment of the German people to the values that the UN represents”, he said, explaining that as a main reason for coming to the Bundestag, as “the last activity I will have during this dramatic year”.

Germany ‘on the frontline’

In commemorating the world body’s 75th anniversary and acknowledging the suffering caused by COVID-19, and challenges “from climate change to inequality, to lawlessness in cyberspace to the different fragilities that undermine our world”, Mr. Guterres upheld that “Germany has been on the frontline” of all UN activities.

Over the past two years, through its role on the Security Council, the country has demonstrated “staunch commitment” to multilateralism and a “principled foreign policy across the broad spectrum of our work from human rights to peace and security, to addressing the challenges of development and humanitarian aid”, said the UN chief.

He recognized Germany’s contributions on issues, such as pandemics, security, sexual violence in conflict, international humanitarian law and non-proliferation as well as its “crucial” and generous support for the UN Peacebuilding Fund.

“I want to express my gratitude to the German government and the people for their generous humanitarian and development support”, said the top UN official.

Aid for Libya and beyond

The Secretary-General elaborated on Germany’s assistance in Libya, the Sahel, Sudan, Ethiopia and several other crises around the world.

He was appreciative of its role in Libya, including hosting the Berlin Conference last January and its efforts galvanize the international community to support the Libyan people.

Mr. Guterres also commended Germany for its “continued commitment” to development and stability in the Sahel region, and, among other things, noted its participation in the UN Multidimensional Integrated Stabilization Mission in Mali (MINUSMA).

Regarding Sudan, he lauded the country’s “important contribution to UN efforts in the Security Council, and for its leadership in the Friends of Sudan group”, which is  bolstering the government through a comprehensive international economic support package that coordinates funding and transparency.

Turning to the efforts to provide relief to the Ethiopian region of Tigray, as well as the general stability and development of the Horn of Africa, the UN chief underlined the importance of “unfettered access for humanitarian assistance as well as the swift resumption of the rule of law, human rights and a secure environment…in which reconciliation becomes possible and public services are delivered”.

Beyond the immediate protection of civilians, he said “the UN, together with our partners stands ready to support Ethiopian-led initiatives to encourage inclusive dialogue, reconciliation, and post conflict reconstruction”.