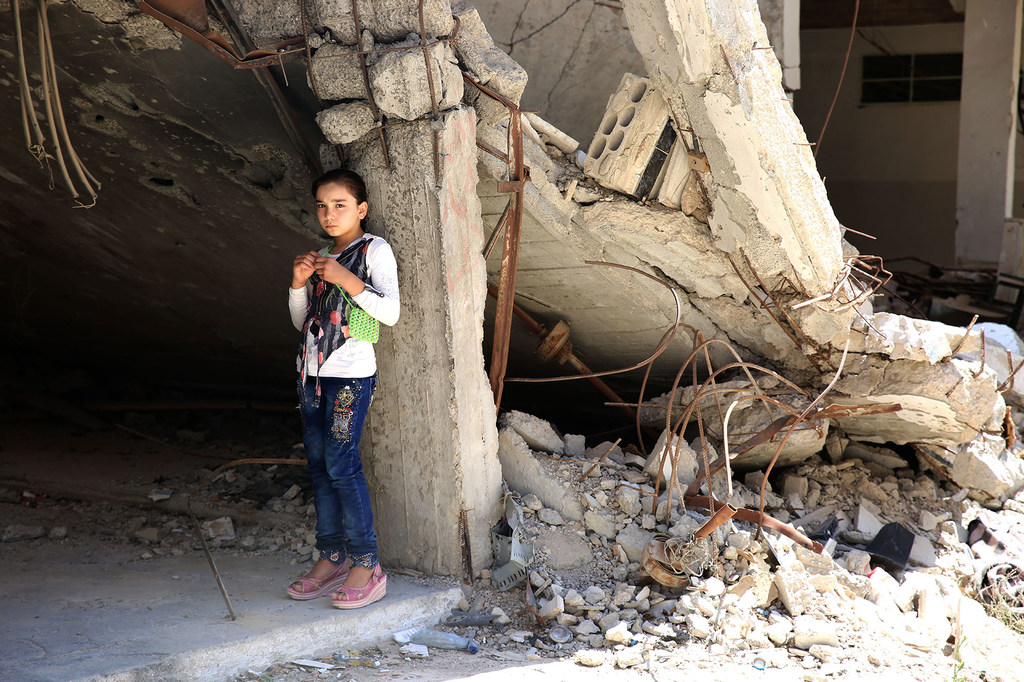 As the Syrian war reaches its grim decade-long milestone, the UN envoy for the country told the Security Council on Monday that it will “go down as one of the darkest chapters in recent history” referring to the Syrian people as among “the greatest victims of this century”.

“I want to commemorate Syrian victims and remember Syrian suffering and resilience in the face of unimaginable violence and indignities that…[they] have faced over ten long years”, Special Envoy Geir Pedersen said, reciting a litany of “countless” violations of international law, including “the unspeakable horrors of chemical weapons”.

The UN envoy said Syrians had been “injured, maimed and killed in every way imaginable – their corpses even desecrated”, with others thrown into prisons or abducted, tortured, “paraded in cages and ransomed”.

He shone a light on displaced Syrians again and again being forced to sleep outside in “baking heat and freezing snow”, as homes, hospitals and schools are destroyed by airstrikes, barrel bombs and rocket fire.

He said civilians had been “denied humanitarian assistance, sometimes under sieges in which perpetrators deliberately starved the population…[and] faced human rights violations on an enormous and systematic scale.

“Syrian women have faced conflict-related sexual violence – from all parties – and the rise in early and forced marriages”, he added.

Meanwhile, citizens are forced to cope with the COVID-19 pandemic with “a depleted and devastated health system”, the UN envoy continued, noting that most children have never lived a day without war and “many have gone without food, medicine or education, or been detained, recruited for battle, injured or killed”.

Over the past decade, Syrians have seen no compromise between incompatible political visions, or any real progress in talks between the government and opposition to reconcile them, according to Mr. Pedersen

Moreover, those responsible for actions that “may amount to crimes against humanity or war crimes” enjoy near-total impunity, which not only undermines a peace agreement but perpetuates the “living nightmare” that has been life in Syria, he said.

“All Syrians have seen that the international community has been divided, trapped in geopolitical competition, caught in their own competing narratives, and often focussed on supporting one side [or other] in the conflict.”

The world has not succeeded in helping deliver peace for ordinary civilians, he said, underscoring the need to find a way around a “you first” syndrome that “characterizes much diplomacy” there.

“Right now, there are demands on all sides but little movement on any side”, he warned.

To move forward, the UN envoy stressed that the Syrian Government, opposition and key international players must identify not only what they hope to achieve, but how they can advance resolution 2254, which calls for a ceasefire and political settlement in the country.

“At a time when there are so many pressing challenges, do not lose sight of the fundamental importance of a peaceful resolution of the Syrian conflict”, he said. “A political solution is the only way out – and I am convinced that it is possible”.

Meanwhile, Bernard Duhaime, current member and former Chair-Rapporteur of the UN Working Group on Enforced and Involuntary Disappearances, spoke of systematic and “flagrant” violation in the country, saying that although UN-identified cases represent only the “tip of the iceberg,” requests to visit facilities have been rebuffed.

ion on the status of disappeared loved ones, elaborating on efforts to identify victims, including exhuming graves, to help grant families with closure after a long decade of trauma.

Mr. Duhaime called attention to this grave crime and elaborated on the Working Group’s efforts to help families secure information on loved ones and advocate for their release.

‘I wish it had been a dream’

To honour the enduring yet fragile resilience of the Syrian people, the UN joined forces on Monday with Messenger of Peace and legendary cellist Yo-Yo Ma’s non-profit organization, Silkroad, to release “I wish it had been a dream”: Voices from Syria.

In a four-minute “soundscape” that mixes 100 self-recorded messages from Syrians with music from renowned Syrian clarinettist and Silkroad artist Kinan Azmeh, the project spotlights a decade of lived testimony.

Drawing public attention to the plight of the 13.4 million people inside Syria needing assistance, it launches ahead of the Secretary-General’s pledging event for Syria, on 30 March, to remind Governments to commit resources to life-saving efforts.