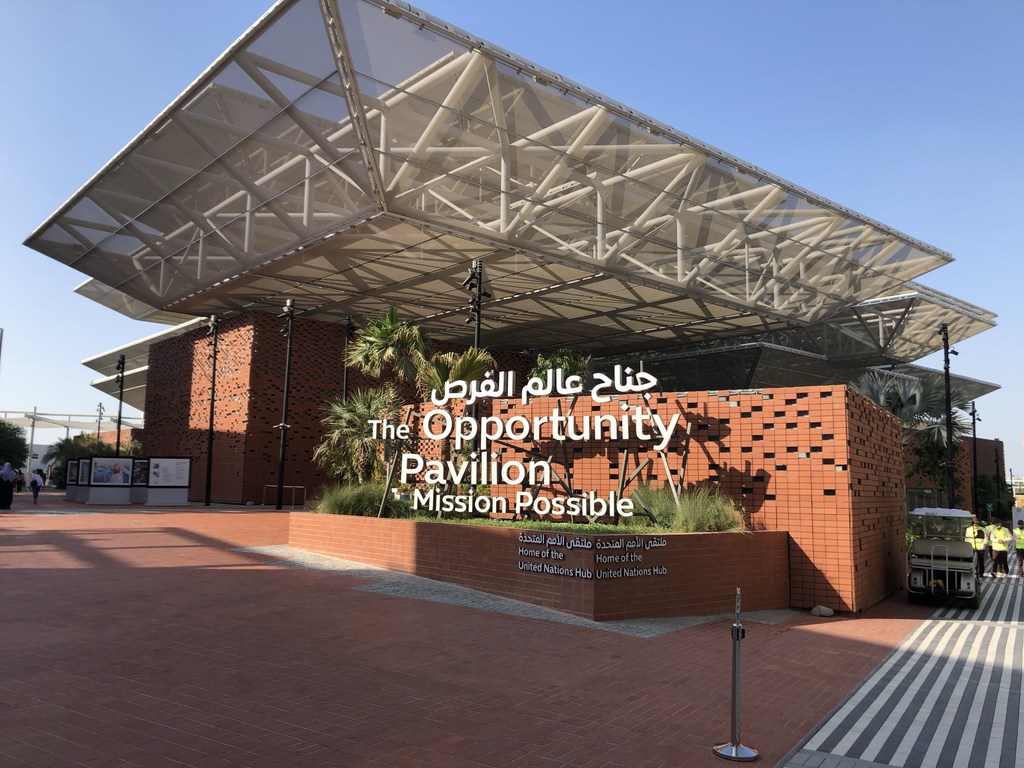 Around two months into a six-month residency at Dubai Expo, the UN Hub has already attracted a large number of visitors, including several delegations from UN Member States. Dena Assaf, the UN Resident Coordinator for the UAE, and Deputy Commissioner-General of the UN at Expo, says that the event is a unique opportunity to highlight the aims and messages of the Organization.

“This Expo is different from other Expos in the sense that the UAE government decided to use it to express the importance of global collaboration, and building a better, sustainable future. So, the theme fits directly with the UN’s main mandate and interests. It’s also the biggest, with nearly all of the world’s countries represented.

The UN Hub forms part of one of the anchor pavilions, called Opportunity Pavilion Mission Possible, which stresses the importance of individual action towards achieving the Sustainable Development Goals (SDGs).

There is a large UN Hub sign outside, so everyone knows that this is for all the many different parts of the organization, and we have outfitted the space to bring the messages of the UN to Expo, currently with a photo exhibition representing people from around the world.

It’s a flexible space, allowing us to show films, organize panel discussions and exhibitions. The photo exhibition on display is from the UN Population Fund (UNFPA), which is about the importance of understanding the challenges women face in all parts of the world, especially in crisis situations.

We have had other exhibits here, such as an SDG art exhibit to help the public understand how the Goals translate to the United Arab Emirates, and another to celebrate the fiftieth anniversary of the country’s founding and the UN’s partnership with the country over these years.

An opportunity to connect

It’s a great opportunity for the United Nations to be in this venue, where we can reach so many people, in a country with a population made up of some 200 nationalities, and a popular international tourist hub.

What I have found, in my personal engagements, as well as those of my colleagues, is that many people have preconceived ideas about the UN, and what it does, so we want to make sure that we can promote the key messages of the Organization.

In the first seven weeks or so, I would say that some 20,000 people have visited the Hub. Some come for 10 minutes or so, but others want to stay longer and have a more in-depth discussion about what we do.

We have also had many interactions with Member States at various different levels, because parliamentary and government delegations are coming to Dubai for their own engagements at Expo.

This is the first time since the pandemic that so many people are coming together from all around the world to discuss issues related to sustainability, and building a better future. And the message I’m getting, from dignitaries and ordinary people, is that they know the UN is here, they want to visit us, and they want to find out what we can do, together, to create that future.”