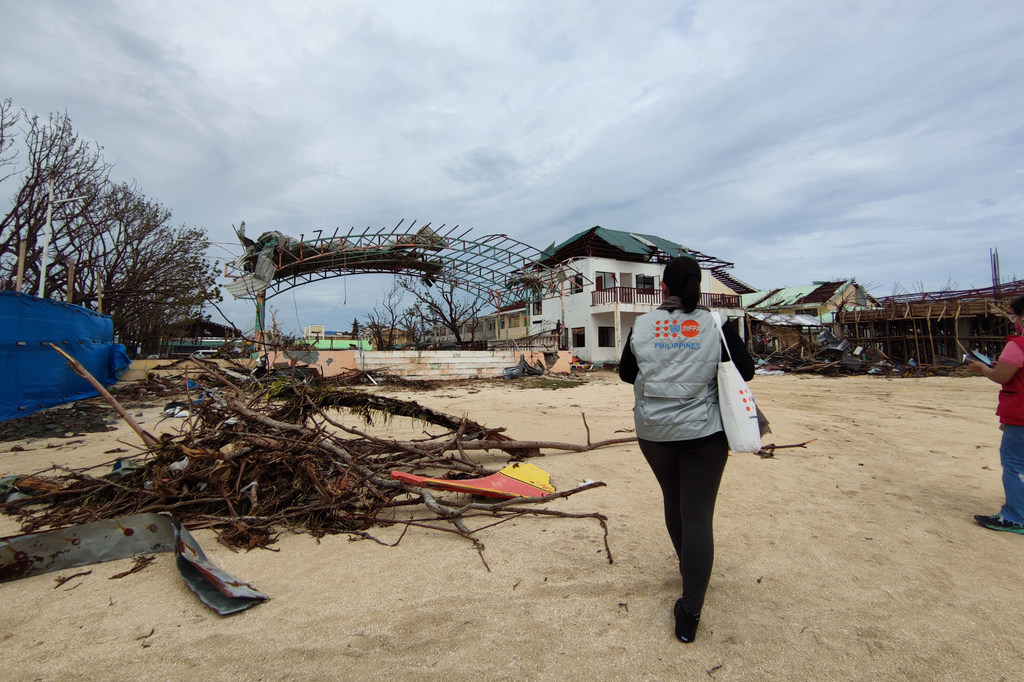 As the debris clears, the scale of destruction is laid bare. When Super Typhoon Rai – Odette as it’s known locally – barrelled down on the Philippines on 16 December, its 195km/h winds and torrential rain tore through hundreds of thousands of homes, businesses and vital infrastructure, putting millions of lives in peril.

Jolina, 23, is eight months pregnant and lives in Burgos on the island of Siargao, which suffered some of the worst fallout of the typhoon.

Her nearest health centre was completely destroyed and she will likely have to travel some 50 kilometres to give birth, she told the UN’s sexual and reproductive health agency, UNFPA, which is busy providing service on the ground.

The situation is no better for Adelina, 43, from Dinagat, who is pregnant with her sixth child and has yet to have her first ultrasound. The nearest medical unit was badly damaged and was only providing emergency prenatal services, so she faces a gruelling two hours by boat, to give birth in Surigao city.

A UNFPA staff member explained that women “in critical conditions are travelling for hours over broken roads or in damaged boats to get to the nearest functioning health centre – some have capsized on the way.

“The lives of patients and health staff are at great risk while they are just trying to provide or seek help.”

© UNFPA PhilippinesAn expecting mother talks to a UNFPA staff member among the wreckage of her home after Typhoon Rai tore through the Philippines in in mid-December 2021.

The third-strongest storm ever recorded in the northern hemisphere, Typhoon Rai left a trail of despair in its wake, particularly in the hardest-hit provinces of Caraga, Mindanao, Surigao and the Visayas.

The full death toll and number of injured is not yet known, but more than nine million people are currently estimated to have been affected, of whom over 2.3 million women are of reproductive age, and more than 91,000 pregnant women. Most of the affected areas had limited maternal, sexual or reproductive health services even before the disaster – now there is mounting fear that unintended pregnancies could soar, including among adolescents, due to the complete suspension of family planning services.

UNFPA and partners were on the ground within days of the disaster, and have so far distributed 2,500 hygiene kits, 2,000 dignity kits, 1,200 reproductive health kits and 800 maternity packs, along with family planning commodities including oral contraceptives and condoms.

Two emergency maternity tents and women’s safe spaces have also been set up to help those most at risk and with the least support services.

Women and girls bear the brunt

More than a month on, there are still widespread food and water shortages and electricity could take up to six months to be restored in some areas.

As looming lockdowns from a COVID-19 surge, and the shutdown of basic social services trap survivors of domestic violence at home with their abusers, the avenues for escape are dwindling.

Over 217,000 people are still displaced, among whom are some 1,700 pregnant women. Families who have lost their homes are crowded into makeshift displacement sites with little privacy and scarce health or sanitation facilities.

Women and children are especially vulnerable to gender-based violence and sexual exploitation in the aftermath of sudden-onset disasters, particularly in cramped evacuation centres and camps with little electricity and scarce water sources, as they must venture long distances in the dark to get water.

Hospitals and health centres have been severely damaged, including most of the traditional Barangay health units, which are crucial suppliers of family planning support for many women. 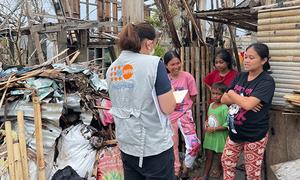 Jolina, a 23-year-old pregnant woman from Siargao Island, must travel some 50 kilometres to give birth at the only remaining functional birthing facility., by © UNFPA Philippines

More than 30 protection centres for women and children are no longer functioning, dealing a harsh blow to efforts to protect the most at risk from human trafficking and gender-based violence.
Women in labour have reported being turned away from hospitals, due not only to the damage wrought by Typhoon Rai but also overcrowding from COVID-19 patients (there were an estimated 275,000 active cases as of 2 February 2022).

This leaves many, especially those with high-risk pregnancies and survivors of domestic violence, without critical safe spaces to seek medical help and refuge. As possible closures and lockdowns loom, more and more women in need will be cut off from essential health and protection support, placing them and their unborn children in great danger.

UNFPA on the ground

Despite inaccessible roads and strict pandemic counter measures, UNFPA is on the ground working with affected communities and local and government partners to respond to the urgent needs of women and girls.

Staff were immediately deployed to assess the extent of the damage and the needs in terms of gender-based violence protection and prevention and maternal, sexual and reproductive health services.

It is critical that this life-saving support be allowed to continue or be swiftly reinstated where interrupted.

In 2020 there was already an estimated 30 per cent increase in mothers in the Philippines dying during childbirth, mainly due to disrupted services at maternal and antenatal facilities, difficulty in accessing health centres, and a fear of contracting COVID-19.

UNFPA urgently needs $12 million over the next six months to ensure millions of the most vulnerable women and girls are not left behind.

“We need to act quickly and together to ensure women and girls experience safe pregnancy and childbirth, have continued access to sexual and reproductive health services, and are protected from gender-based violence during this COVID-19 surge and throughout the Typhoon Rai relief efforts,” urged UNFPA Philippine Country Representative, Dr. Leila Joudane.