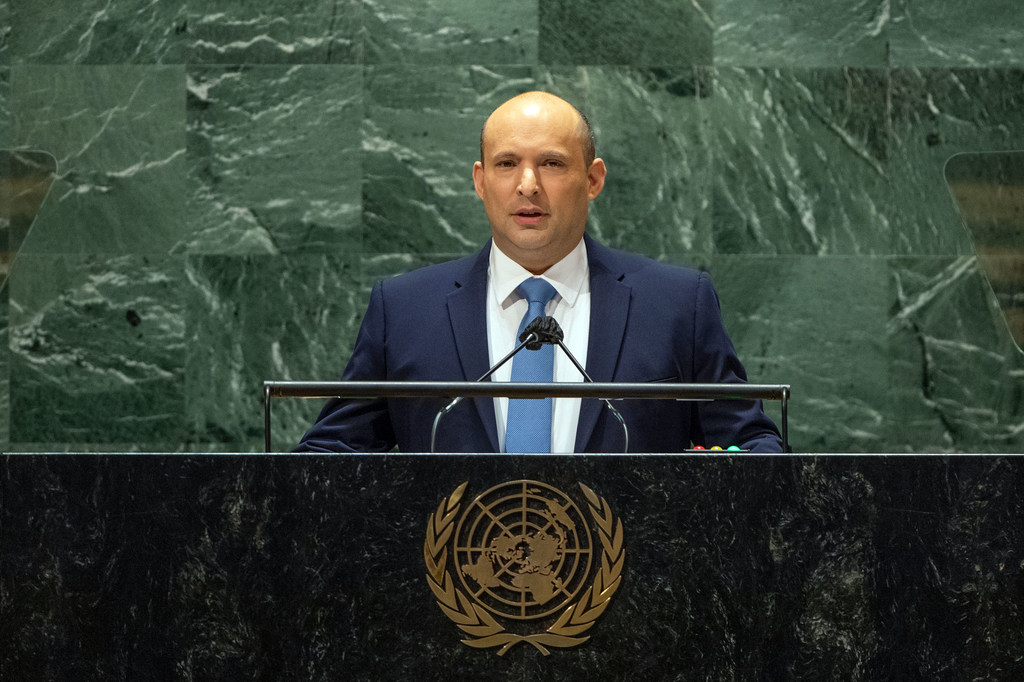 With Iran’s nuclear programme at a “watershed moment”, the country must be stopped from acquiring a nuclear weapon, Israeli Prime Minister Naftali Bennett said on Monday in his inaugural speech to the UN General Assembly.

Iran’s “great goal” is to dominate the region “under a nuclear umbrella”, he stated.

“Iran’s nuclear weapon program is at a critical point. All red lines have been crossed, inspections ignored, all wishful thinking proven false,” he said.

Mr. Bennet said that in recent years, Iran has “made a major leap forward” in nuclear research and development, production capacity and uranium enrichment.

The country is “violating” safeguard agreements with the UN atomic energy watchdog, the IAEA, “and it’s getting away with it”, he said.

“Iran’s nuclear programme has hit a watershed moment, and so has our tolerance.  Words do not stop centrifuges from spinning,” Mr. Bennett told fellow leaders.

“There are those in the world who seem to view Iran’s pursuit of nuclear weapons as an inevitable reality, or they’ve just become tired of hearing about it. Israel doesn’t have that privilege. We will not tire. Israel will not allow Iran to acquire a nuclear weapon.”

“I’m telling everyone: If we put our heads to it, if we’re serious about stopping it, if we use all our resourcefulness, we can prevail. And that’s exactly what we’re going to do.”

Terror in the skies

The Prime Minister outlined additional threats to his country and the world.

Israel, he said, is “quite literally surrounded” by Hezbollah, Shia militias, Islamic Jihad and Hamas which want to dominate the Middle East and spread radical Islam worldwide.

He added that Tehran has also created “a new deadly terror unit” consisting of unarmed aerial vehicles (UAVs) that can strike at any time.

“They plan to blanket the skies of the Middle East with this lethal force,” he said, reporting the weapons have already been used in attacks against Saudi Arabia, United States targets in Iraq, and civilian ships at sea.

“Iran plans to arm its proxies in Yemen, Iraq, Syria and Lebanon with hundreds – and, later on, thousands – of these deadly UAVs. So, you can ignore it, but experience tells us that what starts in the Middle East, doesn’t stop there.”

On the COVID-19 pandemic, Prime Minister Bennett reported that Israel moved quickly to vaccinate its people.  He said the country also “pioneered” booster shots, administering third doses this July, thus avoiding another lockdown amid a fourth wave of infections.

Emphasizing that “not everything is dark in the Middle East”, he highlighted Israel’s growing ties with Arab and Muslim countries and commended “new friends”, including 38 countries which skipped out on the recent commemoration of the 20th anniversary of the Durban Conference against racism, which he described as antisemitic.