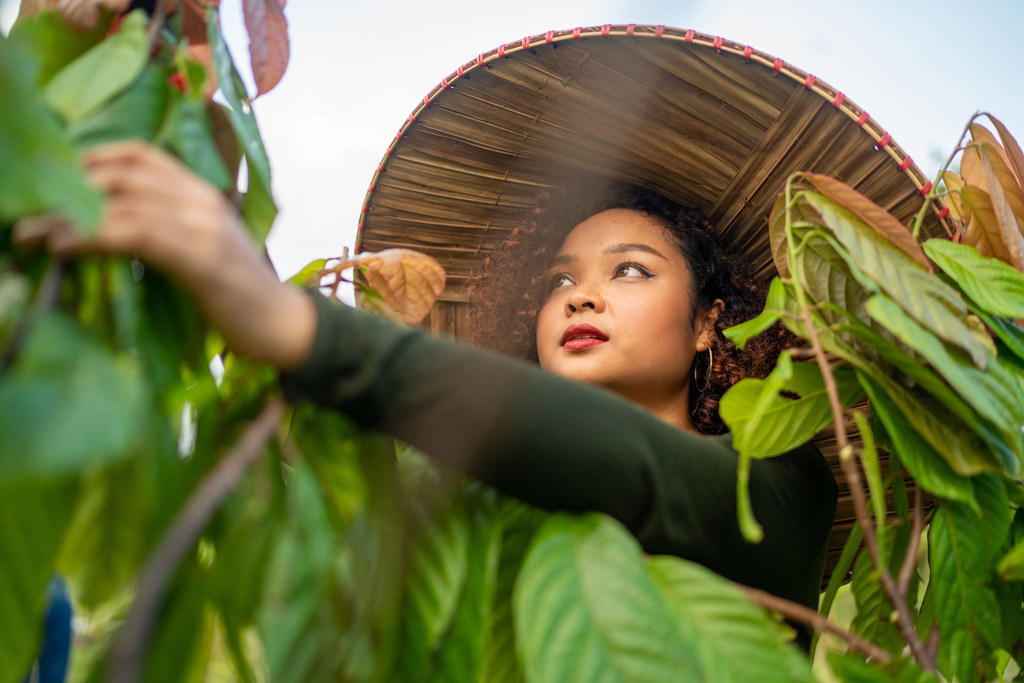 Some farming techniques can have a devastating and negative effect on the environment, as farmers seek to harvest the maximum amount of produce from their land, but the efforts of a Filipino chef and activist are demonstrating that, with the right approach, agriculture can help to regenerate land, offer protection from the effects of climate change and extreme weather, and improve livelihoods.

Louise Mabulo has been recognized as a prodigy of the culinary world since the age of 12, when she appeared on the Filipino version of the TV show Junior Masterchef. Since then, she has won several awards for her cooking, and has become a world-renowned social activist.

Ms. Mabulo, a 2019 UN Environment Programme (UNEP) Young Champion of the Earth, is the founder of The Cacao Project, which works to improve the livelihoods of Filipino farmers in the Bicol Region, by reviving barren lands through tree planting, creating economic forests and nurseries, and promoting fair trade and reforestation.

“As a chef, I am frequently in contact with farmers. These discussions gave me a good insight into the problems with the food system in the Philippines: where there are gaps, and where there is over-supply.

This prompted me to start farm-to-table dinners, using only local ingredients. When Bicol region was hit hard by a typhoon, I began a relief effort for farmers, but I realised that this could only have a superficial effect on their lives, so I oriented my career towards agriculture.

The Philippines is one of the countries that is most severely affected by climate change: since September of last year, we have been struck by three typhoons and, in Bicol, where I’m from, 400 homes were destroyed.

Whilst Bicol is a lush and green region, far from urban centres, there is still a lot of degradation. When typhoons destroy crops and farms, people with no other option will do what they can to create income, including cutting down trees.

The Cacao Project’s goal is to ensure that farmers don’t have to resort to these kinds of measures, and to provide them with the resources they need for sustainable success, even in the face of extreme weather events.

For example, we explain that leaves shaken from trees from storms create a lot of mulch, which providers great compost. Using trees for mulch is more restorative and sustainable than removing the trees, and it improves the soil. The methods we teach them are helping them to save money, and improve their harvests.

UNEPFarmers working with The Cacao Project, founded by 2019 Champion of the Earth Louise Mabulo (left), learn sustainable techniques to help them cope with climate change.

Proud to be farmers

Our approach is completely in line with the UN’s recommended approach to farming: more nature-friendly, more supportive of biodiversity, limiting the use of pesticides and herbicides, and cultivating a wider range of indigenous crops.

Before the project began, a small range of crops were being cultivated: mainly corn, coconut and rice. Once we started working with the farmers, they began to introduce more crops that are well suited to the local conditions, such as bell peppers, okra and, of course, cacao.

Many of the farmers involved in The Cacao Project have seen significant improvements to their lives. They’re learning modern techniques, and have been able to put their children through school. Women are being empowered: we have women trainers and supervisors, and the quality of their work is being recognized.

Younger people are also becoming more interested in farming, which has not been valued as a profession in the past: it was associated with poverty and failure. Today they’re turning their backyards into gardens, and even planting trees in land they’ve inherited from their parents. They’re proud to be farmers, which they see as being part of the solution to climate change.

UNEPFarmers working with The Cacao Project, founded by 2019 Champion of the Earth Louise Mabulo, learn sustainable techniques to help them cope with climate change.