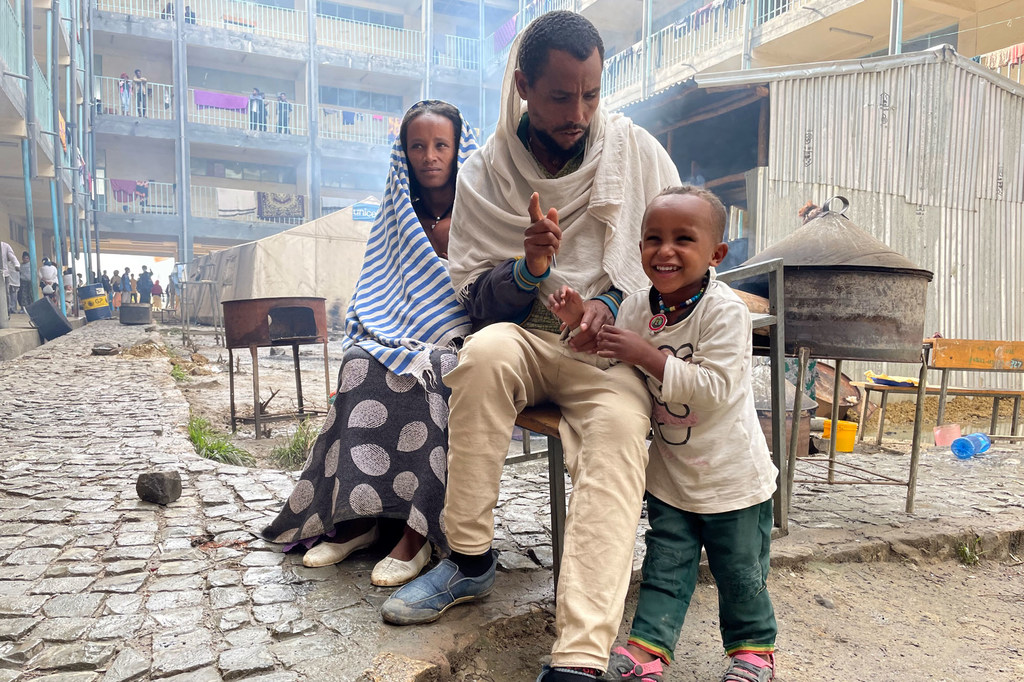 A ceasefire in Tigray on humanitarian grounds is needed now more than ever if a massive aid operation across frontlines is to succeed, the UN’s emergency relief chief said on Friday.

Speaking in Geneva, Martin Griffiths highlighted the urgency of the situation for all those affected in the northern Ethiopian region, after eight months of fighting between Government forces and those loyal to the Tigray People’s Liberation Front (TPLF).

Earlier this week, the UN senior official warned that 200,000 people had been displaced by fighting in neighbouring Amhara region, along with more than 50,000 in Afar.

“This war has to stop, this war has to end; we will all of us continue to try to make sure that those 100 trucks a day reach Mekelle, reach the beneficiaries”, Mr. Griffiths insisted. “We will do everything we can to help the people affected in Amhara and Afar, while continuing the work in other parts of Ethiopia.”

Highlighting the logistical challenge of negotiating aid access into Tigray while the violence continues, the UN emergency relief chief said that he had “no reason to doubt” the ceasefire announced by Ethiopian premier Abiy Ahmed, who he met in the capital Addis Ababa earlier this week, along with other senior government leaders.

“The Prime Minister has issued a unilateral ceasefire, he repeated his commitment to it on the two occasions that we met, and I have no reason to doubt that at all. For the Tigrayans who are spreading the war into the south and east, into Afar and Amhara, they need to take into account that without that ceasefire, we will try to get those 100 trucks in, but it’s going to be easier for the Tigrayan people if the war is stopped.”

Since conflict erupted last November, humanitarian needs have grown, amid killings, looting and destruction of health centres and farming infrastructure, including irrigation systems that are vital to successful harvests.

“They need food, the harvest which has recently been planted is likely only to produce between a quarter, and maximum a half, of its likely production. So, the need for food is going to go right through until next year,” said Mr. Griffiths.

“They need re-equipment of primary health centres. We saw hospitals and health centres destroyed, the equipment taken away. There are health workers but not salaries.”

Noting that some 178 aid trucks had reportedly reached Tigray regional capital Mekelle in recent days, with another 40 waiting to arrive, the UN official underscored how difficult it has been to secure regular aid access amid checkpoint delays and detailed searches, which he had experienced at first hand on a UN flight to Mekelle.

“The frustration of agencies – I’ve just spent two days with them; national NGOs, international NGOs, UN agencies – is that they have access, but haven’t had the supplies needed to exploit the access”, he said. He added it was “hopefully a little bit better today because of those 178 trucks, but a lot still (needs) to be done.”

Despite the complexity of the situation, Mr. Griffiths maintained that his discussions with the Prime Minister, Abiy Ahmed, the Deputy Prime Minister and Foreign minister and the Minister of Peace and others, had been “very constructive” during his six-day visit to Ethiopia.

“They of course told me that they were very keen to help on the difficult issue of delivery of assistance and then protection of civilians,” he added, before repeating his condemnation of the “very high degree of rhetoric” which had seen humanitarian officials and aid workers “condemned in public and on social media” for “feeding the Tigrayan machine”.

“I spoke to those leaders that I’ve mentioned that any such criticisms need to stop. First of all, it threatens the lives of people who are there to help, and secondly of course, it has an impact on humanitarian delivery,” he said.

© WFP/PhotolibraryAid workers arrive in Mekelle in the Ethiopian region of Tigray on the first humanitarian passenger flight there.

In a related development, a UN-appointed independent rights expert warned on Friday that Eritrean refugees trapped in Tigray are being targeted by both sides to the conflict.

“Since the conflict began, I have received many credible allegations of grave human rights and humanitarian law violations committed against Eritrean refugees, both by the Federal Government of Ethiopia and government-allied Eritrean troops, and by forces affiliated with the Tigray People’s Liberation Front,” the expert said.

“Eritrean refugees have been singled out, targeted and victimised by both sides for their perceived collaboration with the other side in the conflict.”

In a written appeal to all parties to protect refugees in line with international human rights and humanitarian law, the rights expert warned that an estimated 80,000 refugees were at “imminent risk” in the Tigray and Afar regions as fighting spreads.

“I am extremely alarmed at reports of reprisal attacks and killings, sexual violence, beatings of Eritrean refugees and looting of camps and property. This violence directed at refugees must stop,” Mr Babiker said.

In July, the UN refugee agency, UNHCR, expressed concern about 24,000 Eritrean refugees in Mai Aini and Adi Harush camps, who had been cut off from humanitarian assistance and were facing intimidation and harassment.

Recent armed confrontations have also displaced thousands of people in neighbouring Afar region, which hosts an additional 55,000 Eritrean refugees. In January, Hitsats and Shimelba refugee camps were destroyed. Some 20,000 refugees were displaced and hundreds went missing.

“International humanitarian law has long recognized the need to protect civilians caught in conflict,” the rights expert said. “I specifically call on all sides to respect the 1951 Refugee Convention.”