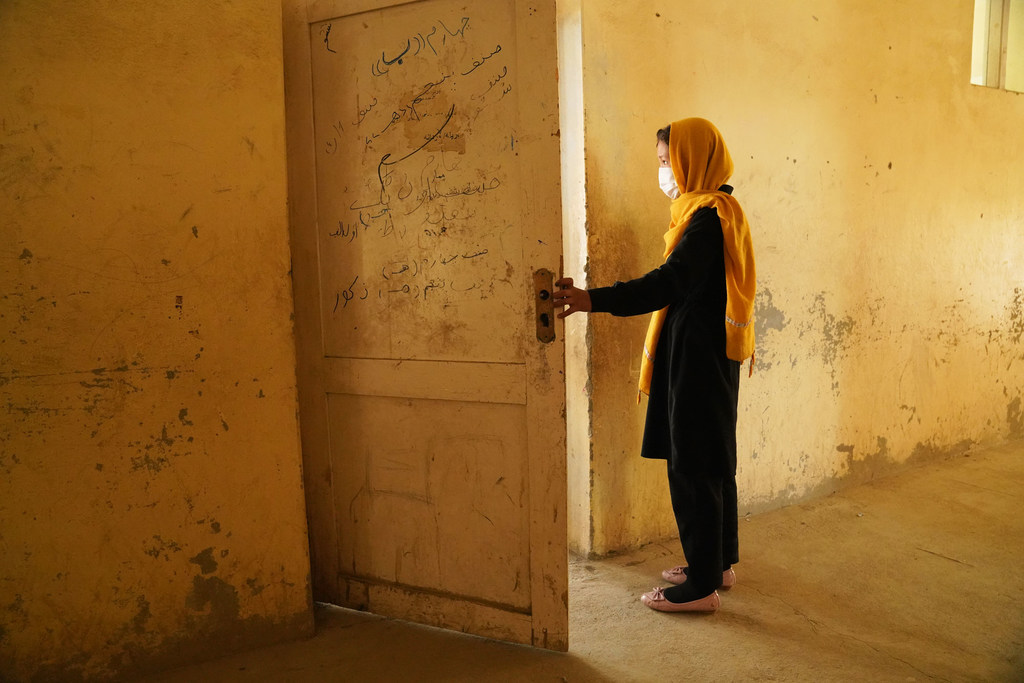 Since the Taliban seized power in Afghanistan last month, they have made some commitments to uphold human rights. However, their subsequent actions have “sadly contradicted” those promises, the UN rights chief told a side event of the General Assembly on Tuesday.

Michelle Bachelet informed a high-level event on safeguarding 20 years of international engagement in Afghanistan, that women have been “progressively excluded from the public sphere”, prohibited from appearing without a male guardian and face increasing restrictions on their right to work.

“The Ministry that once promoted women’s rights has been disbanded, and its premises taken over by a Ministry for the propagation of Virtue and the prevention of Vice – an all-male office that will apply guidelines on appropriate dress and behaviour” the human rights chief said.

“There is real and palpable fear among Afghan women of a return to the Taliban’s brutal and systemic repression of women and girls during the 1990s”, said the High Commissioner.

Meanwhile, a growing humanitarian crisis across the country is putting one million children in danger of extreme hunger, with families headed by women – most of whom can no longer work – among those at greatest risk.

Over the last 20 years, Afghan women have worked towards ensuring greater respect for and protection of their rights to education, work, political participation and freedom – of movement and expression.

“These rights are part of the evolution of Afghan society and are integral to the development and economic growth of Afghanistan”, underscored Ms. Bachelet.

As women and girls comprise half of Afghanistan’s population, she reminded that the country would benefit by utilizing their talents and capabilities.

The High Commissioner said that “first and foremost”, women and girls must have full and equal access to essential services, including healthcare and education; be able to work in every sector of the economy; be free to move without restrictions; and live free of all gender-related violence.

“In short, Afghan women and girls’ human rights must be upheld and defended”.

When engaging with the Taliban, Ms. Bachelet stressed that the international community, including the UN and all its Member States, must commit to “strong advocacy that demands compliance with these basic requirements for any fair and just society”.

“Respect for the rights of the women and girls of Afghanistan now will be a harbinger of the country’s future”, she said. “They face extraordinary challenges – and we will remain at their side”.

Henrietta Fore, Executive Director of the UN Children’s Fund (UNICEF), outlined some of the country’s advances, from tripling the number of schools since 2002 to increasing youth literacy from 47 to 65 per cent over the past decade.

“Over the past 20 years, school enrolment has increased ten-fold, reaching almost 10 million children today. Four million of those children are girls”, she said, calling them “significant improvements.”

Most recently however, girls over the age of 12 have been prohibited from attending school – with the genders separated at the university level and female students prohibited from being taught by male professors, who make up the majority of instructors.

Amidst her deep concern that many girls may not be allowed back to school, the UNICEF chief called it “critically important” that Afghan children have “an equal chance to learn and develop the skills they need to thrive”.

“Girls cannot, and must not, be left behind. It is critical that…[they] are able to resume their education without any further delays”, she spelled out.

UNICEF/Sayed BidelAcross Afghanistan, children’s education has been disrupted for two academic school years now due to the COVID-19 pandemic.

For this to happen, Ms. Fore stressed the need for female educators to resume teaching and be “actively” protected.

She noted that the international community must also increase investment in education.

“At a bare minimum, every child needs foundational literacy and numeracy skills,” she said, adding that “girls and boys need qualified female and male teachers, who regularly receive their salaries and are supported to teach”.

Despite improvements, the plight of Afghanistan’s children was clear even before the Taliban took control of the country.

Ms. Fore highlighted that of the 4.2 million children not enrolled in school, 2.6 million are girls. And for those who are, COVID-19 has thwarted ten months of education and threatens the most vulnerable from ever returning to the classroom.

According to UNICEF, “access to quality education” is not only a right for every child, it is also an investment to expand opportunities for each child, their families, and their communities.

“There has never been a more urgent time to stand with the children of Afghanistan – boys but especially girls – and with the people who inspire and guide them”, concluded Ms. Fore, urging everyone to “protect and support these children”.