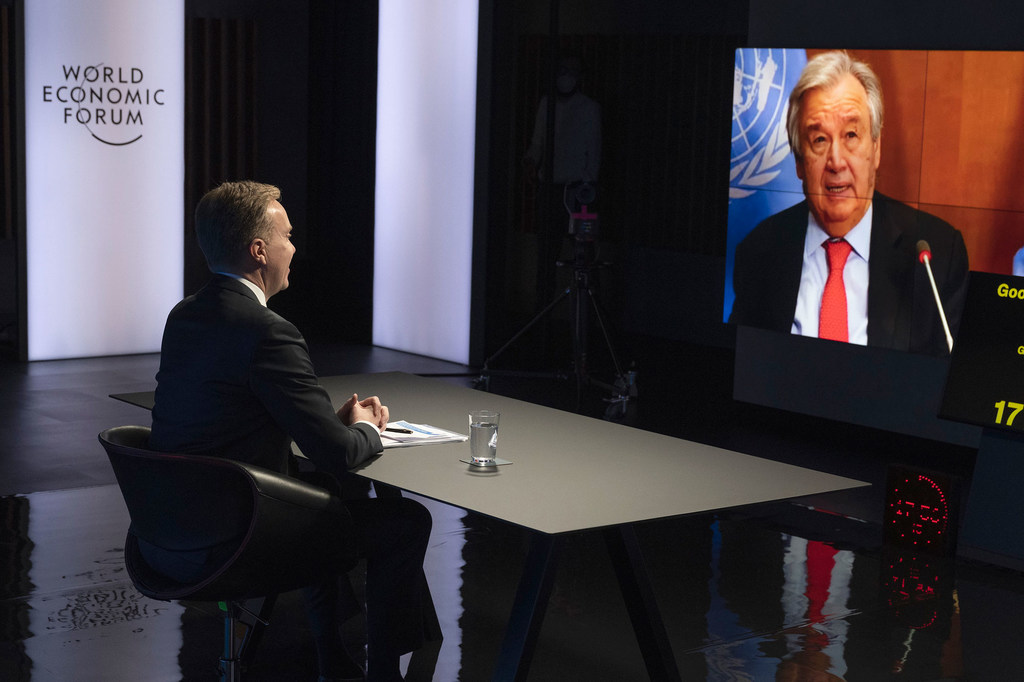 The private sector has a key role to play in lifting countries out of both the COVID-19 and climate crises, UN Secretary-General António Guterres told international business leaders on Monday.

“We need you more than ever to help us change course, end fragility, avert climate catastrophe and build the equitable and sustainable future we want and need”, he said in a speech to the Davos Agenda gathering of the World Economic Forum, which is taking place online this year instead of in the Swiss Alps.

The Secretary-General addressed the forum as the UN released its latest report which warns that global economic recovery from the pandemic remains precarious.

COVID-19 has generated the worst economic crisis for nearly a century, exposing inequalities and fragilities both within and among countries, Mr. Guterres said, speaking from New York,

“We have reached a moment of truth.  In 2021 we must address these fragilities and put the world on track”, he stated.

“It is time to change course and take the sustainable path. And, this year, we have a unique opportunity to do so. We can use our recovery from the COVID-19 pandemic to move from fragilities to resilience.”

The Secretary-General emphasized that pandemic recovery must be inclusive while also tackling climate change and biodiversity loss.

“Inclusive and sustainable recovery around the globe will depend on the availability and effectiveness of vaccines for all, immediate fiscal and monetary support in both developed and developing countries, and transformative longer-term stimulus measures”, he said.

While COVID-19 vaccines have been developed, distribution has been uneven, he said, as richer nations have received doses while the world’s poorest countries have none.

Reiterating that vaccines must be seen as global public goods, he called for funding for the COVAX Facility, the mechanism working to ensure equal access to all countries.

Mr. Guterres also underlined the need to address structural inequalities that have made so many societies vulnerable, including through debt relief for countries that need it.

“We also need to bring more fairness into the world of work”, he added. “That means that we reduce the very high increase disparities we have in incomes today in the labour markets. And it means closing the gender pay gap, ensuring women’s full and productive employment and increasing women’s participation in decision-making at all levels.”

On climate change, the Secretary-General stressed that the central goal this year is to build a global coalition to achieve carbon neutrality by 2050.

“Every country, city, financial institution and company needs to adopt credible plans backed by intermediate goals for transitioning to net zero emissions by 2050, and to take decisive action now to put themselves on the right path,” he said, adding “every sector must do its part, from aviation and agriculture to transport, shipping and industry.”

The world also needs to “flick the ‘green switch’” to renewable energy, which will create new jobs and a healthier future. The UN chief said all of this is within reach, as more countries register their commitment.

He called for private sector action towards achieving a sustainable future for all, and in implementing the Paris Agreement on Climate Change, which seeks to limit global warming.

“We count on businesses to play an important role by themselves and to put pressure on governments. Every action, big or small counts, but those with greater capabilities and resources should lead the way”, he said.

The devastating fallouts from the pandemic will be felt for years unless smart investments in economic, societal and climate resilience ensure a robust and sustainable recovery of the global economy, the UN said in the latest edition of The World Economic Situation and Prospects report, published on Monday.

The world economy shrank by 4.3 per cent last year, which is over 2.5 times more than during the financial crisis a decade ago.  The authors said the modest 4.7 per cent recovery expected this year would barely offset those losses.

Developed economies shrank the most in 2020, or by 5.6 per cent, due to economic shutdowns and subsequent waves of the pandemic.  This has increased the risk of premature austerity measures which would derail global recovery efforts, according to the report.  These nations are projected to see four per cent growth in 2021.

Meanwhile, developing countries saw a 2.5 per cent contraction in 2020 and are estimated to rebound by 5.6 per cent.

Women and girls bear the brunt

The pandemic also pushed 131 million more people into poverty, many of whom were women, children, and members of marginalized communities.  The crisis has disproportionately affected women and girls, who have faced increased risk of devastation, poverty and violence.

Readers can find information and guidance on the outbreak of the novel coronavirus (2019-nCoV) from the UN, World Health Organization and UN agencies here. For daily news updates from UN News, click here.

Women also comprise more than half of the workforce in sectors that have been hard hit by lockdowns, such as retail, hospitality and tourism.

Although some $12.7 trillion in massive and timely stimulus measures prevented a total collapse of the world economy and averted another ‘Great Depression’, last manifest in the 1930s, stark disparity in the size of these packages mean developed and developing countries will be on different paths to recovery.

Additionally, financing stimulus packages has increased public debt globally by 15 per cent, representing a potential burden for future generations unless investments are made to promote growth.

The report underscores that sustained recovery will depend not only on the size of stimulus measures, and the quick rollout of vaccines, but also on the quality and efficacy of these measures to build resilience against future shocks.

“The depth and severity of the unprecedented crisis foreshadows a slow and painful recovery,” said Elliott Harris, UN Chief Economist and Assistant Secretary-General for Economic Development.

“As we step into a long recovery phase with the roll out of the vaccines against COVID-19, we need to start boosting longer-term investments that chart the path toward a more resilient recovery – accompanied by a fiscal stance that avoids premature austerity and a redefined debt sustainability framework, universal social protection schemes, and an accelerated transition to the green economy.”

First Person: Digging for victory in the Philippines

FROM THE FIELD: COVID crisis creates new wave of self-reliance for Tonga

FROM THE FIELD: The Myanmar child workers risking their lives for stones

First Person: Digging for victory in the Philippines

FROM THE FIELD: COVID crisis creates new wave of self-reliance for Tonga

FROM THE FIELD: The Myanmar child workers risking their lives for stones