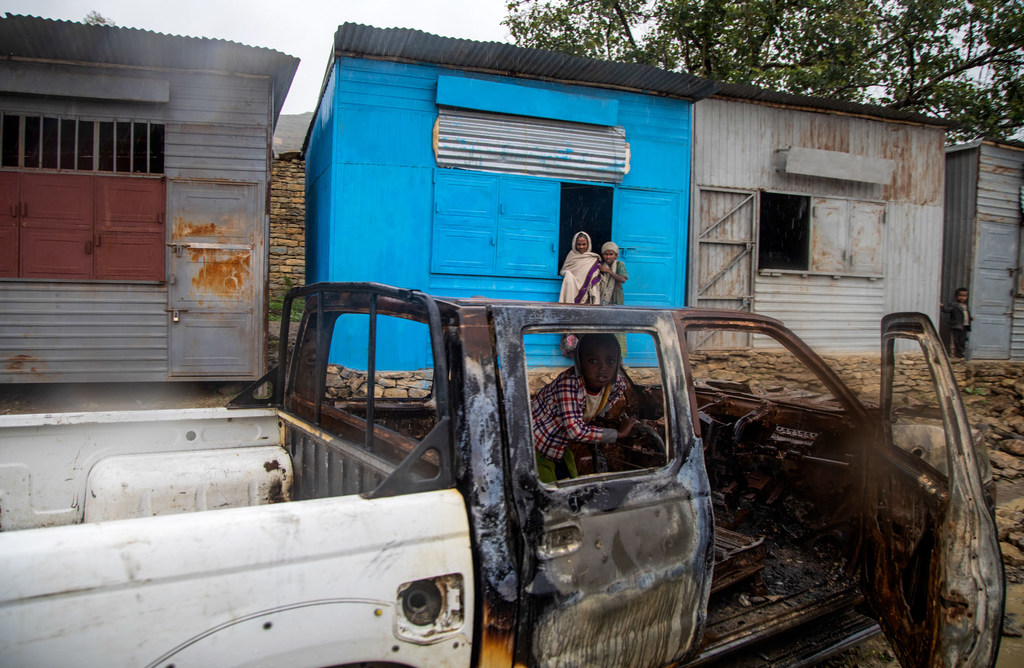 Aid and food distribution operations in northern Ethiopia are about “to grind to a halt” amid ongoing fighting, bloodshed and a lack of funding that is making humanitarian access impossible, the UN World Food Programme, WFP, said on Friday.

Escalating clashes in Tigray have meant that no WFP aid convoys have been able to reach the regional capital, Mekelle, since 14 December.

More worrying still, stocks of nutritionally fortified food to treat malnourished women and children have now been exhausted and the last of WFP’s cereals, pulses and oil, will be distributed this week.

“Because of fighting, food distributions are at an all-time low,” said WFP spokesperson, Tomson Phiri in Geneva. “WFP aid workers on the ground tell me that warehouses are completely empty…in my experience that’s a very dire sign, it almost never happens.”

“We’re now having to choose who goes hungry to prevent another from starving,” said Michael Dunford, WFP’s Regional Director for Eastern Africa. “We need immediate guarantees from all parties to the conflict for safe and secure humanitarian corridors, via all routes, across northern Ethiopia.

Humanitarian supplies are simply not flowing at the pace and scale needed, WFP’s Mr. Dunford warned, meaning that the agency has only reached 20 per cent of those it wanted to in its latest distribution round in Tigray. “We’re on the edge of a humanitarian disaster,” he said.

Targets have included camps for displaced people and refugees, a training college and a private minibus travelling from Adiet to Axum city, close to the Eritrean border.

A communal flour mill also became a target of a suspected drone strike on Monday 10 January, when 17 civilians were reportedly killed and 21 injured – most of them women – as they gathered to grind their grain.

But the deadliest strike so far has been on Dedebit camp on Monday 7 January, which left at least 59 people dead and injured 30 others, which UN Secretary-General António Guterres said had left him “deeply saddened”.

“We call on the Ethiopian authorities and their allies to ensure the protection of civilians and civilian objects, in line with their obligations under international law. Any attack, including airstrikes should fully respect the principles of distinction, proportionality and precautions in attack,” Ms. Throssell told journalists in Geneva.

“In particular, parties to the conflict must take all feasible measures to verify that targets are indeed military objectives and suspend an attack if it becomes apparent that the target is not a military objective or that the attack would be disproportionate. Failure to respect the principles of distinction and proportionality could amount to war crimes.”

More than a year into the conflict in northern Ethiopia, an estimated 9.4 million people require humanitarian food assistance. This is an increase of 2.7 million from four months ago, “the highest number yet”, WFP said in a statement.

The UN agency plans to reach 2.1 million people with food assistance in Tigray, along with 650,000 in the neighbouring region of Amhara and 534,000 in Afar region.

Next month, WFP also warned that it will likely run out of food and nutrition supplies for millions “across all of Ethiopia”, owing to an unprecedented lack of funding.

It is calling for an additional $337 million to deliver its emergency food assistance response in northern Ethiopia and $170 million to reach those affected by severe drought in Somali region over the next six months.